The Cedarville Shop and the Wheelbarrow Swap (Hardcover) 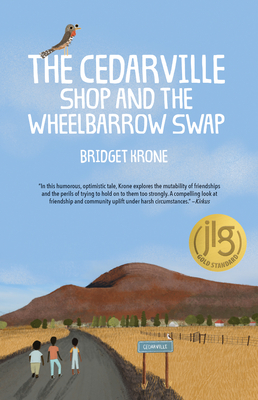 The Cedarville Shop and the Wheelbarrow Swap (Hardcover)

From the award-winning author of Small Mercies, named a Best Middle-Grade Book of 2020 by Kirkus Reviews

"I've decided that some people put out fires and leave the world cold and hopeless and others nurse the kindling, blow like mad and fan the flames with whatever they have at hand - so that everyone feels its warmth."

A lot of things can feel just out of reach in 12-year-old Boipelo Seku's small, impoverished village of Cedarville, South Africa. The idea of one day living in a house that's big enough for his family is just a faraway dream. But when Boi stumbles on a story about a Canadian man who traded his way from a paperclip to a house, Boi hatches his own trading plan starting with a tiny clay cow he molded from river mud. Trade by trade, Boi and his best friend Potso discover that even though Cedarville lacks so many of the things that made the paperclip trade possible, it is fuller than either of them ever imagined.

In a chain of events that turns Boi's tiny spark into a warming fire, Boi learns the power of friendship and community, and finds that something's value isn't in what you can trade for it, but in the good it brings to the people you love.

With a motley crew of characters, wholehearted humor, and a whole lot of hope, The Cedarville Shop and the Wheelbarrow Swap is a joyful read for lovers of The Penderwicks or classics like The Moffats.

Bridget Krone lives and works in a village called Hilton just outside Pietermaritzburg, in the foothills of the Drakensberg mountains in South Africa. Her office looks onto a field where cows graze in the winter and cranes (both crowned and blue) visit in the summer. She has spent most of her working life writing short novels and English language text books for school children in South Africa. Her favorite stories are those that, just when you expect a lesson, sing a song instead. Her debut novel, Small Mercies, was named a Best Middle-Grade Book of 2020 by Kirkus Reviews and featured on the 2021 Outstanding International Books List by the United States Board on Books for Young People.