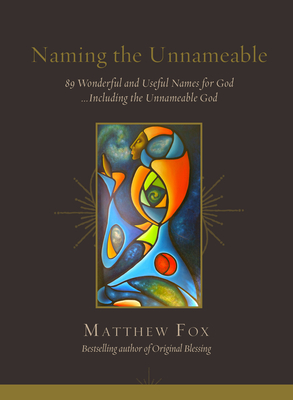 “Matthew Fox elegantly offers a contemplative practice that transforms the names of God to the experience of God.” –Deepak Chopra MD

How many names for Divinity are there? Do the names for God change as we mature as individuals, evolve as a species, and face a critical “turning time” in human and planetary history?”

Too often, notions of God have been used as a means to control and to promote a narrow worldview.  In Naming the Unnameable, renowned theologian and author Matthew Fox ignites our imaginations by offering a colorful range of Divine Names gathered from scientists and poets and mystics past and present, inviting us to always begin where true spirituality begins: From experience.

Ultimately, no name for God suffices.   We are challenged to continue to probe the rich ecology of human spirituality to ask questions, embrace paradox, and listen silently to the deepest of life’s mysteries.

Matthew Fox, who holds a doctorate in the history and theology of spiritualities from the Institut catholique de Paris, is author of 35 books on spirituality and culture that have been translated into 69 languages and received many awards. Since Creation Spirituality is both a mystical and a prophetic tradition, Fox’s support of social, racial and gender justice disturbed naysayers in the Vatican which silenced him for a year and then pressured the Dominican Order to dismiss him after 34 years. Subsequently he founded the University of Creation Spiritualty in California and became an Episcopal priest. A new school called the Fox Institute in Creation Spirituality has recently been launched in Colorado. He is a visiting scholar with the Academy of the Love of Learning in Santa Fe, New Mexico founded by Leonard Bernstein and Aaron Stern. He lives in northern California. Among the awards granted him have been the Gandhi-King-Ikeda Peace Award from Morehouse College, the Tikkun Ethics Award, and the Courage of Conscience Award from the Peace Abbey of Sherborn, Massachusetts. Other recipients of this award include the Dalai Lama, Mother Teresa, Rosa Parks, Ernesto Cardinale and Maya Angelou.