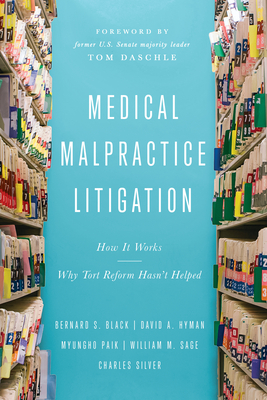 
Call or email for availability
Over the past 50 years, the United States experienced three major medical malpractice (med mal) crises, each marked by dramatic increases in the cost of malpractice liability insurance. These crises fostered a vigorous politicized debate about the causes of the premium spikes, and the impact on access to care and defensive medicine. State legislatures responded to the premium spikes by enacting damages caps on non-economic, punitive, or total damages and Congress has periodically debated the merits of a federal cap on damages. However, the intense political debate has been marked by a shortage of evidence, as well as misstatements and overclaiming. The public is confused about answers to some basic questions. What caused the premium spikes? What effect did tort reform actually have? Did tort reform reduce frivolous litigation? Did tort reform actually improve access to health care or reduce defensive medicine? Both sides in the debate have strong opinions about these matters, but their positions are mostly talking points or are based on anecdotes. This book provides factual answers to these and other questions about the performance of the med mal system. The authors, all experts in the field and from across the political spectrum, provide an accessible, fact-based response to the questions ordinary Americans and policymakers have about the performance of the med mal litigation system.
Bernard S. Black is the Nicholas D. Chabraja Professor at Northwestern University School of Law and Kellogg School of Management. He is also managing director of the Social Science Research Network and founding chairman of the annual Conference on Empirical Legal Studies.David A. Hyman is an adjunct scholar at the Cato Institute and a Professor of Law at Georgetown University. A doctor as well as a lawyer, Hyman is the coauthor of Overcharged: Why Americans Pay Too Much for Healthcare.Myungho Paik is an associate professor at Hanyang University's College of Policy Science.William M. Sage is the James R. Dougherty Chair for Faculty Excellence at the School of Law and Professor of Surgery and Perioperative Care, Dell Medical School, University of Texas.Charles Silver, MA, JD, holds the Roy W. and Eugenia C. McDonald Endowed Chair in Civil Procedure at the University of Texas School of Law, where he teaches about civil litigation, health care policy, legal ethics, and insurance.