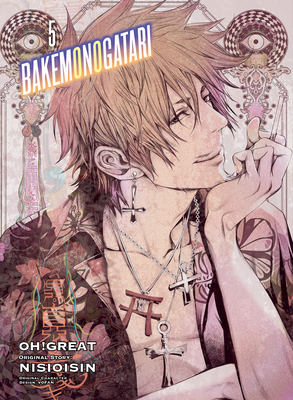 This is book number 5 in the Bakemonogatari (manga) series.

From the best selling novel series by renouned author NISIOISIN, comes the manga adaptation of the Monogatari Series! Artwork by Oh! great.

Suruga Kanbaru, the biggest celebrity in school, lives in a completely different world from Koyomi Araragi,
but their worlds collide when Koyomi finds that this campus star has been stalking him for some unknown reason.
Koyomi soon connects the dots, but before he can land on the truth, Suruga tells all and reveals how she had a “hand” in another strange event in Koyomi’s life…
Born in 1981, NISIOISIN dropped out of Ritsumeikan University in Kyoto, to pursue a career in story-telling. Initially he had ambitions to be a comic artist, but he began to focus on his writing, eventually winning the 23rd Mephisto Prize, for Kubikiri Cycle (Del Rey) recognizing his talents as a mystery writer, at the age of 20. Since his debut in 2002 Nisio has penned more than 50 novels and a number of comics. And he has quickly become one of Japan's top selling author's in recent memory with more than 5 million units sold since 2009.