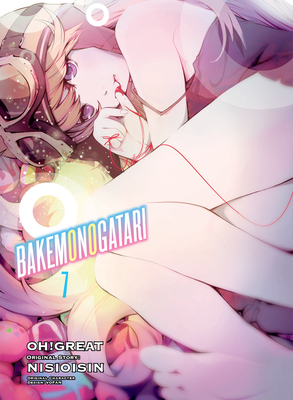 This is book number 7 in the Bakemonogatari (manga) series.

From the best selling novel series by renouned author NISIOISIN, comes the manga adaptation of the Monogatari Series! Artwork by Oh!great.


Mutilated snakes and a tree riddled with vile insults.
This is the gruesome scene that Koyomi Araragi and Suruga Kanbaru witnessed while visiting a shrine deep in the mountains.

Behind this horror is Nadeko Sengoku, a girl who has found herself in a twisted situation with a snake god. Koyomi feels that he must save her, but can he act fast enough to free Nadeko from the deadly grip of this newest aberration?
Born in 1981, NISIOISIN dropped out of Ritsumeikan University in Kyoto, to pursue a career in story-telling. Initially he had ambitions to be a comic artist, but he began to focus on his writing, eventually winning the 23rd Mephisto Prize, for Kubikiri Cycle (Del Rey) recognizing his talents as a mystery writer, at the age of 20. Since his debut in 2002 Nisio has penned more than 50 novels and a number of comics. And he has quickly become one of Japan's top selling author's in recent memory with more than 5 million units sold since 2009.