Don't Hurt a Sasquatch: And Other Wacky-but-Real Laws in the USA & Canada (Hardcover) 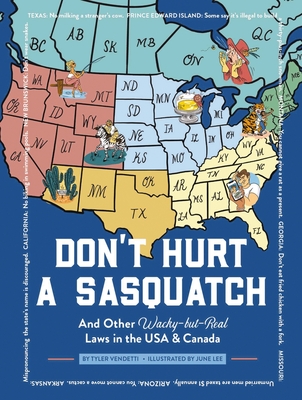 Don't Hurt a Sasquatch: And Other Wacky-but-Real Laws in the USA & Canada (Hardcover)


Available at One of Our Locations
Imagine if forgetting your wife’s birthday was not only discouraged, but a crime? That’s one of many real-life blue laws (rules prohibiting a hyperspecific activity) that Don't Hurt a Sasquatch covers. This hilarious compendium dives into the quirkiest decrees from around the country, from Alabama’s ban on driving blindfolded to Delaware’s restriction on selling dog hair.

Every state in the country has its own set of rules, carefully designed to identify the biggest problems in its culture and correct them. Most of them are normal: don’t steal, don’t kill, don’t go somewhere you don’t belong, etc. All it takes is one weirdo to throw a wrench in that ordinary list, one unruly dude who tried to hold a salmon suspiciously or wash an alligator in a bathtub for lawmakers to step in and impose some order. What are some of these crazy laws, you ask? Take your pick:

The list goes on. More interesting than the laws themselves are the histories behind each, which Blue Laws goes into in detail. Like, why can’t you roll a boulder in Boulder, Colorado? Who decided that you couldn’t catch fish with your hands in Indiana? Why are blue laws called “blue laws” and how did they come to mean “generally weird rules” (instead of their original meaning: “laws dictating what citizens can and cannot do on Sundays”)? In this informative and funny book, you will find out through a series of anecdotes, court cases, and illustrated pictures that break down just how and why these rules (most of which are still currently in effect) came to be. Good for history teachers, trivia nerds, or white elephant gift exchange participants, Don't Hurt a Sasquatch is a widely appealing book that will teach you more about how the world works than you ever wanted to know.
Tyler Vendetti is a writer and wannabe dog mom whose work focuses on pop culture, humor, and the trials and tribulations of twentysomething-hood. Author of The Illustrated Compendium of Ugly and Gross English Words, she boasts bylines in xoJane, TIME Online, Cosmopolitan magazine, HelloGiggles, The Penny Hoarder, and Thought Catalog, among others. Formerly of NBCUniversal and Warner Bros., she works as an entertainment assistant in Los Angeles. A comedy enthusiast with a flair for horror, Tyler can be found on Twitter @HeyThereFuture or at her home in Los Angeles, where she’s been hiding behind the couch the whole time.

June Lee is a graphic designer and illustrator who enjoys everything communication design-related, from painting murals to branding design. Projects include the Truth Campaign for The New York Times, Pizzaz Pizza Festival, and Junk magazine. In h her free time, June can be found reading with a cup of coffee in hand, or out hunting for the best coffee in the city. She lives in Brooklyn, New York. For more of her work, visit juneleedesign.com.