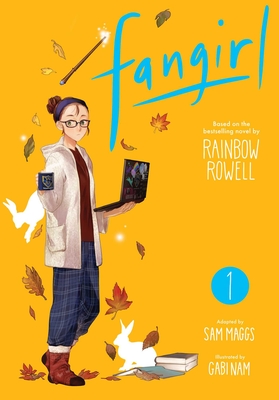 This is book number 1 in the Fangirl series.

The manga adaptation of the beloved novel featuring all-new scenes by Rainbow Rowell!

Cath doesn’t need friends IRL. She has her twin sister, Wren, and she’s a popular fanfic writer in the Simon Snow community with thousands of fans online. But now that she’s in college, Cath is completely outside of her comfort zone. There are suddenly all these new people in her life. She’s got a surly roommate with a charming boyfriend, a writing professor who thinks fanfiction is the end of the civilized world, a handsome new writing partner…

And she’s barely heard from Wren all semester!
Rainbow Rowell lives in Omaha, Nebraska, with her husband and two sons. She is the #1 New York Times bestselling author of Carry On, Landline, Attachments and Wayward Son and the writer of Marvel’s Runaways and the graphic novel Pumpkinheads.

Sam Maggs is a bestselling author of books, comics and video games. She’s been a senior games writer, including work on Marvel’s Spider-Man; the author of many YA and middle-grade books like The Unstoppable Wasp, Con Quest!, Tell No Tales and The Fangirl’s Guide to the Galaxy; and a comics writer for beloved titles like Marvel Action: Captain Marvel, My Little Pony and Transformers.

Gabi Nam is a South Korean artist who has lived abroad in Japan and France. She self‑publishes her work in South Korea and specializes in the black‑and‑white manga style. Fangirl: The Manga is her English debut.
"Perfect for teens growing into their fandoms and those of us who have grown along with our obsessions, this adaptation of an already relatable story is sure to be a hit..."
– Polygon
— Polygon