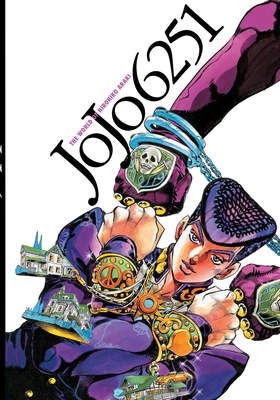 Hirohiko Araki changed the face of manga forever when he created JoJo’s Bizarre Adventure! The epic story of the Joestar family spans generations, and iconic stories like Phantom Blood, Battle Tendency, Stardust Crusaders, and Diamond Is Unbreakable have made the series a fan favorite—and Araki himself the ultimate fan-favorite artist. JoJo 6251: The World of Hirohiko Araki celebrates his work with an incredible collection of illustrations, foldout posters, and highly desired behind-the-scenes information. Explore the characters, their Stands, and everything you ever wanted to know about heroes like Jotaro Kujo and Josuke Higashikata, and cruel villains like Dio!
Hirohiko Araki made his manga debut in 1981 with the Wild West story Busô Poker. He experimented with several genres, including mystery (Mashonen B.T.) and action-horror (Baoh), before beginning JoJo’s Bizarre Adventure in 1986. Propelled by imaginative storylines, weird imagery and individualistic artwork, JoJo’s Bizarre Adventure is one of the longest-running and most popular shonen manga ever. Araki’s current works include a new series set in the JoJo universe, JoJolion.