Why Digital Transformations Fail: The Surprising Disciplines of How to Take Off and Stay Ahead (Compact Disc) 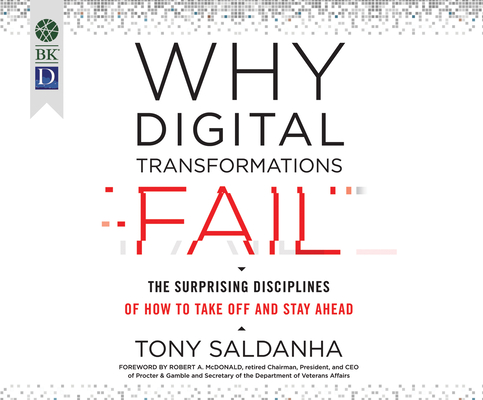 Why Digital Transformations Fail: The Surprising Disciplines of How to Take Off and Stay Ahead (Compact Disc)


Call or email for availability
Digital transformation is more important than ever now that we're in the Fourth Industrial Revolution, where the lines between the physical, digital, and biological worlds are becoming ever more blurred. But fully 70 percent of digital transformations fail. Why? Tony Saldanha, a globally awarded industry thought-leader who led operations around the world and major digital changes at Procter & Gamble, discovered it's not due to innovation or technological problems. Rather, the devil is in the details: a lack of clear goals and a disciplined process for achieving them. In this audiobook, Saldanha lays out a five-stage process for moving from digitally automating processes here and there to making digital technology the very backbone of your company. For each of these five stages, Saldanha describes two associated disciplines vital to the success of that stage and a checklist of questions to keep you on track. You want to disrupt before you are disrupted--be the next Netflix, not the next Blockbuster. Using dozens of case studies and his own considerable experience, Saldanha shows how digital transformation can be made routinely successful, and instead of representing an existential threat, it will become the opportunity of a lifetime.