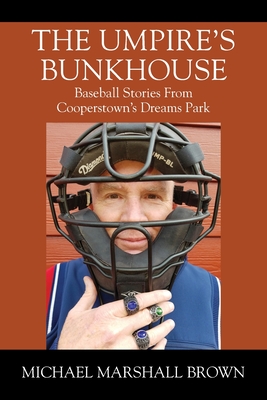 Who are they? The men in blue have masks covering their faces and there's an undeniable, deep mystique about umpires.

The Umpire's Bunkhouse, Baseball Stories from Cooperstown's Dreams Park, will give the real truth about umpires. They come from all over the nation. They are wise and kind people who believe integrity is everything.

During an era of major league cheating scandals with cameras hidden in the outfield fences, and the threat of robots replacing human umpires, it is timely to read The Umpire's Bunkhouse.

Baseball umpires survive if not thrive staying together in primitive bunkhouses, with no heat or air conditioning and thin mattresses.

Read how a baseball bully is handled and ultimately overcome with a little help from the author's friends in blue. See how author Michael Marshall Brown recovered from triple bypass heart surgery barely a year prior.

Flashback to the author's memories of Cooperstown, as the author was the Sports Editor of the Daily Star newspaper and covered the nearby Baseball Hall of Fame in the 1980s. Read about personal contacts with stars of the game including Joe DiMaggio, Ted Williams, Warren Spahn, Henry Aaron, and Cool Papa Bell.