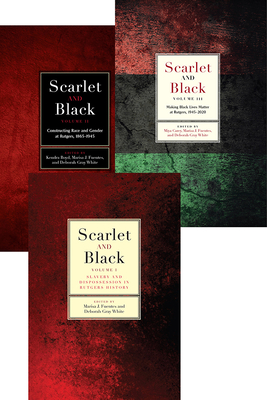 
Currently Unavailable
The 250th anniversary of the founding of Rutgers University is a perfect moment for the Rutgers community to reconcile its past, and acknowledge its role in the enslavement and debasement of African Americans and the disfranchisement and elimination of Native American people and culture.

Scarlet and Black, Volume One documents the history of Rutgers’s connection to slavery, which was neither casual nor accidental—nor unusual. Like most early American colleges, Rutgers depended on slaves to build its campuses and serve its students and faculty; it depended on the sale of black people to fund its very existence.

Scarlet and Black, Volume Two continues the work of the Committee on Enslaved and Disenfranchised Population in Rutgers History. This latest volume includes an introduction to the period from the end of the Civil War through WWII, a study of the first black students at Rutgers and New Brunswick Theological Seminary, and profiles of the earliest black women to matriculate at Douglass College.

Scarlet and Black, Volume Three concludes this groundbreaking documentation and includes essays about Black and Puerto Rican students' experiences; the development of the Black Unity League; the Conklin Hall takeover; the divestment movement against South African apartheid; anti-racism struggles during the 1990s; and the Don Imus controversy and the 2007 Scarlet Knights women's basketball team.

Scarlet and black are the colors Rutgers University uses to represent itself to the nation and world. They are the colors the athletes compete in, the graduates and administrators wear on celebratory occasions, and the colors that distinguish Rutgers from every other university in the United States. This body of work, however, uses these colors to signify something else: the blood that was spilled on the banks of the Raritan River by those dispossessed of their land and the bodies that labored unpaid and in bondage so that Rutgers could be built and sustained. The contributors to these volumes offer this history as a usable one—not to tear down or weaken this very renowned, robust, and growing institution—but to strengthen it and help direct its course for the future.

To learn more about the work of the Committee on Enslaved and Disenfranchised Population in Rutgers History, visit the project's website at http://scarletandblack.rutgers.edu.
KENDRA BOYD is an assistant professor of history at Rutgers University.

MIYA CAREY is is an assistant professor of history at Binghamton University. Her forthcoming manuscript examines the role of social organizations in coming-of-age black girls in Washington, DC, in the twentieth century.

MARISA J. FUENTES is an associate professor in women’s and gender studies and history at Rutgers University, New Brunswick, New Jersey. She is the author of Dispossessed Lives: Enslaved Women, Violence, and the Archive.

DEBORAH GRAY WHITE is a Board of Governors Distinguished Professor of History at Rutgers University, New Brunswick. She is the author or editor of numerous books including, Ar’n’t I A Woman? Female Slaves in the Plantation South.