Promised Land: How the Rise of the Middle Class Transformed America, 1929-1968 (Hardcover) 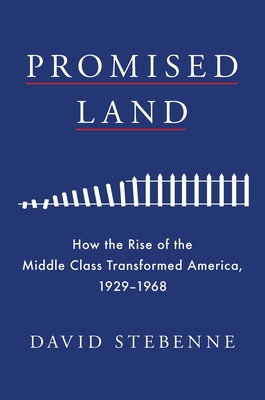 A timely work of groundbreaking history explains how the American middle class ballooned at mid-century until it dominated the nation, showing who benefited and what brought the expansion to an end.

In Promised Land, David Stebenne examines the extraordinary revival of the middle class in mid-twentieth century America and how it drastically changed the country. The story begins with the pervasive income and wealth inequality of the pre-New Deal period. What followed—Roosevelt’s reforms, the regulation of business and finance, higher taxation of the truly affluent, and greater government spending—began a great leveling. World War II brought the military draft and the GI Bill, similarly transformative elements that also helped expand the middle class. For decades, economic policies and cultural practices strengthened the trend, and by the 1960s the middle class dictated American tastes from books to TV shows to housing to food, creating a powerful political constituency with shared interests and ideals.

The disruptive events of 1968, however, signaled the end of this headlong expansion. The cultural clashes and political protests of that era turned a spotlight on how the policies and practices of the middle-class era had privileged white men over women, people of color, and other marginalized groups, as well as economic growth over environmental protection. These conflicts, along with shifts in policy and economic stagnation, started shrinking that vast middle class and challenging its values, trends that continue to the present day. Now, as the so-called “end of the middle class” dominates the news cycle and politicians talk endlessly about how to revive it, Stebenne’s vivid history of a social revolution that produced a new and influential way of life reveals the fascinating story of how it was achieved and the considerable costs incurred along the way. In the form of a revealing history, Promised Land shines more than a little light on our possible future.

David Stebenne, the author of Promised Land, is a specialist in modern American political and legal history. He has published political commentary in The Conversation, HuffPost, The New Republic, The Observer, and Salon and has appeared on National Public Radio’s All Things Considered to discuss politics, the economy, and labor issues. A native of Rhode Island and Maryland, he teaches history and law at Ohio State University.

“David Stebenne’s Promised Land invites us to remember those decades in which both the middle class and the Democratic Party were ascendant. Mr. Stebenne, a professor of history at the Ohio State University, offers more warning than nostalgia, for his lesson is that ‘the rise of the middle class, and the growth of the mechanisms that powered it, eventually undermined the stability of that achievement.’”
—Wall Street Journal

"Looks at how the economic turmoil of the 1930s, the GI Bill of Rights, and the civil rights movement of the 1960s helped the middle class rise and fall, and how we can learn from the successes and failures."
—Columbus Monthly Magazine

“Stebenne has written a provocative account of [middle-class Americans’] rise and fall … A thoughtful look at a long-ago era when America seemed egalitarian and prosperous.”
—Kirkus Reviews

"Considering its central role in modern American history, the middle class has received remarkably little attention from historians, compared with labor or the rich.  But now David Stebenne gives us an insightful account of the rise of the middle class -- as an economic and social entity and a state of mind — from the New Deal to the1960s.  Uniting political, economic, and cultural history, and paying necessary attention to those excluded from the benefits of middle class life because of race, gender, and geography, Promised Land challenges us to think creatively about how to combat today's inequality and declining economic opportunity."
—Eric Foner, author of Battles for Freedom and The Second Founding

"David Stebenne's sparkling new study of the rise of America's middle class since 1929 provides readers with an exciting blend of political, economic, and cultural history.  You need to read this book if you want to understand the astonishing changes in America between the Great Depression and the failed leadership of President Lyndon Johnson. You also should read it if you want to grasp how much your life and prospects have changed since 1968."
—Louis Galambos, editor of The Papers of Dwight David Eisenhower and author of Eisenhower: Becoming the Leader of the Free World