The Bomb: Presidents, Generals, and the Secret History of Nuclear War (Paperback) 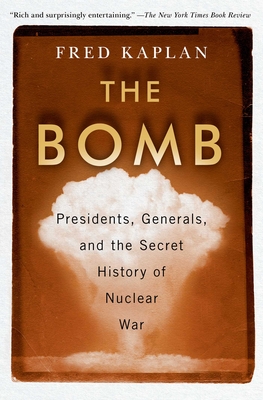 The Bomb: Presidents, Generals, and the Secret History of Nuclear War (Paperback)


Ships to Our Store in 1-5 Days
From the author of the classic The Wizards of Armageddon and Pulitzer Prize finalist comes the definitive history of American policy on nuclear war—and Presidents’ actions in nuclear crises—from Truman to Trump.

Fred Kaplan, hailed by The New York Times as “a rare combination of defense intellectual and pugnacious reporter,” takes us into the White House Situation Room, the Joint Chiefs of Staff’s “Tank” in the Pentagon, and the vast chambers of Strategic Command to bring us the untold stories—based on exclusive interviews and previously classified documents—of how America’s presidents and generals have thought about, threatened, broached, and just barely avoided nuclear war from the dawn of the atomic age until today.

Kaplan’s historical research and deep reporting will stand as the permanent record of politics. Discussing theories that have dominated nightmare scenarios from Hiroshima and Nagasaki, Kaplan presents the unthinkable in terms of mass destruction and demonstrates how the nuclear war reality will not go away, regardless of the dire consequences.
Fred Kaplan is the national-security columnist for Slate and the author of five previous books, Dark Territory: The Secret History of Cyber War, The Insurgents: David Petraeus and the Plot to Change the American Way of War (a Pulitzer Prize finalist and New York Times bestseller), 1959, Daydream Believers, and The Wizards of Armageddon. He lives in Brooklyn with his wife, Brooke Gladstone.