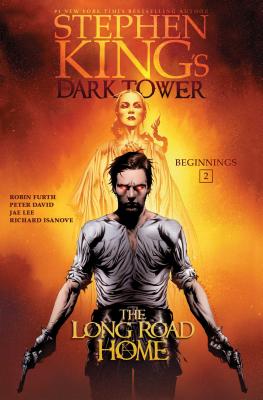 Enter once more the world of Roland Deschain—and the world of the Dark Tower...now presented in a stunning graphic novel form that will unlock the doorways to terrifying secrets and bold storytelling as part of the dark fantasy masterwork and magnum opus from #1 New York Times bestselling author Stephen King.

Taking place directly following the shocking events seen in The Gunslinger Born, Roland along with Cuthbert Allgood and Alain Johns must flee for their lives from the town of Hambry, with a murderous posse close behind and the road ahead to Gilead and home fraught with peril. But Roland cannot resist the lure of their stolen prize—the enchanted seeing sphere nicknamed “Maerlyn’s Grapefruit”—and finds his consciousness trapped inside this mystical orb...where many important secrets lie in wait, their revelations heralding death or worse. And while Roland’s ka-tet is absorbed in its own drama, something is emerging from the desolate place known as the Dogan, as a long-slumbering spirit that portends great evil has awakened....