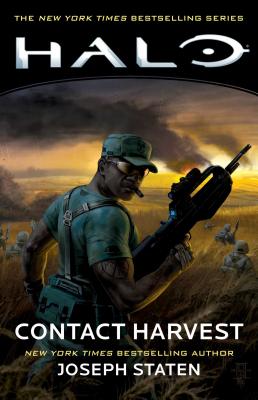 
Ships to Our Store in 1-5 Days
The New York Times bestseller—part of the expanded universe based on the award-winning video game series Halo!

2524. Harvest is a peaceful, prosperous farming colony on the very edge of human-controlled space. But humanity has unknowingly trespassed on holy ground—straying into the path of the aggressive, theocratic empire known as the Covenant. What begins as a chance encounter between an alien privateer and a human freighter soon catapults all of mankind into a struggle for its very existence.

But humanity is also currently locked in a bitter civil war of its own: the Insurrection. With resources strained to the breaking point, the ultimate survival of Harvest’s citizens falls to a squad of battle-weary UNSC Marines and their inexperienced colonial militia trainees. In this unlikely group of heroes, one will stand above the rest—a young Marine staff sergeant named Avery Johnson....
Joseph Staten is the senior creative director at Microsoft and was the writer and creative lead for Halo: Combat Evolved, Halo 2, and Halo 3, as well as Halo: ODST and Halo: Reach. He is the New York Times bestselling author of Halo: Contact Harvest and the novella Halo: Shadow of Intent. He lives with his family in Washington.