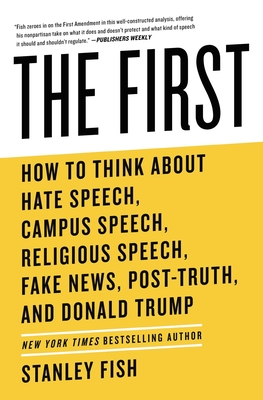 From celebrated public intellectual, New York Times bestselling author, and “America’s most famous professor” (BookPage) comes an urgent and sharply observed look at freedom of speech and the First Amendment offering a “nonpartisan take on what it does and doesn’t protect and what kind of speech it should and shouldn’t regulate” (Publishers Weekly).

How does the First Amendment really work? Is it a principle or a value? What is hate speech and should it always be banned? Are we free to declare our religious beliefs in the public square? What role, if any, should companies like Facebook play in policing the exchange of thoughts, ideas, and opinions?

With clarity and power, Stanley Fish explores these complex questions in The First. From the rise of fake news, to the role of tech companies in monitoring content (including the President’s tweets), to Colin Kaepernick’s kneeling protest, First Amendment controversies continue to dominate the news cycle. Across America, college campus administrators are being forced to balance free speech against demands for safe spaces and trigger warnings.

With “thoughtful, dense provocations that will require close attention” (Kirkus Reviews), Fish ultimately argues that freedom of speech is a double-edged concept; it frees us from constraints, but it also frees us to say and do terrible things. Urgent and controversial, The First is sure to ruffle feathers, spark dialogue, and shine new light on one of America’s most cherished—and debated—constitutional rights.

Stanley Fish is the Davidson-Kahn Distinguished University Professor of Humanities and Law at Florida International University and a visiting professor of law at Cardozo University. He has previously taught at the University of California at Berkeley, Johns Hopkins University, Duke University, and the University of Illinois at Chicago where he was dean of the College of Liberal Arts and Sciences. He has received many honors and awards, including being named the Chicagoan of the Year for Culture. He is the author of many renowned books, including Winning Arguments and How to Write a Sentence: And How to Read One. Fish is a former weekly columnist for The New York Times. His essays and articles have appeared in The Chronicle of Higher Education, Harper’s Magazine, Esquire, and The Atlantic.

“Fish zeroes in on the First Amendment in this well-constructed analysis, offering his nonpartisan take on what it does and doesn’t protect and what kind of speech it should and shouldn’t regulate.”
—Publishers Weekly