Ask Me What's for Dinner One More Time: Inappropriate Thoughts on Motherhood (Paperback) 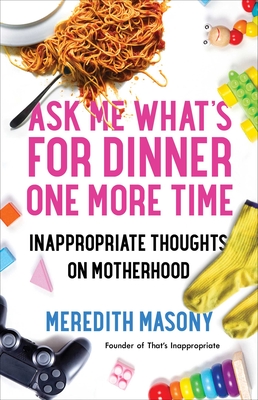 Ask Me What's for Dinner One More Time: Inappropriate Thoughts on Motherhood (Paperback)


Ships to Our Store in 1-5 Days
From the founder of That’s Inappropriate—one of the most popular parenting blogs on the web—comes a hilarious, genuine, and relatable essay collection on the ups and downs of motherhood.

Meredith Masony founded That’s Inappropriate in 2014 as an innocent and humorous way to chronicle her chaotic days as a working mom, child wrangler, and busy wife. It soon evolved into a massive, dynamic community of parents—now nearly three million strong—brought together by their shared belief that parenthood and marriage don’t have to be perfect.

Now, in Ask Me What’s for Dinner One More Time, Meredith shares her collection of witty essays on the universal frustrations of being a mom in today’s world, presenting her laugh-out-loud perspective on sex, aging, anxiety, friendship, and much more. Perfect for fans of Jenny Lawson, Laura Clery, and Jen Mann, these essays provide laughter, relief, validation, and “a metaphorical hug for all of those moments you spend crying on your bathroom floor, thinking that you are failing at the hardest job on the planet.”
Meredith Masony is the founder of That’s Inappropriate, an online parenting community with over four million followers across social platforms, where members can talk about the parenting experiences they love, hate, and everything in between. Meredith is a former teacher, and has spoken at women’s and social media conferences including Dad 2.0, Mom 2.0, and Start Loving You. She is the author of Scoop the Poop and Ask Me What’s for Dinner One More Time. Meredith is married to her best friend Dave, who is now her business partner. They live in Florida with their three children and two dogs.
“Authentic, hilarious, and brutally honest ... At a time when parents may feel more overwhelmed and isolated than ever, Masony reminds readers that they are not alone.”
— Melissa Norstedt, Booklist

“For Masony, founder of the That’s Inappropriate blog, her experiences as a wife and mother of three provide seemingly endless fodder for a series of amusing, flippant essays… Comical commentaries with grains of truth revealing motherhood in all its warts-and-all glory.”
—Kirkus

“This one's going to be a good one… Meredith tackles and shines the light on the harder struggles of parenting with humor and truth.”
—CafeMom

“Parenthood isn’t for the faint of heart and I love how Meredith uses her no-nonsense humor to show moms like me it's okay to be a mess. Between her raw truths and hilarious approach to the daily battle of raising kids while maintaining sanity, this book will have you chuckling and nodding in solidarity the entire time.”
—Tiffany Jenkins, Juggling the Jenkins

“Meredith isn’t afraid to tell it how it is. She’s funny without trying and beautifully blunt. Her unapologetic honesty scares the shit out of me. In a good way.”
—Laura Clery, author of Idiot and creator of Help Helen Smash

"So much fun to read. Who says that kind of thing about a parenting book? It is chock full of that catch-you-off-guard, pee-in-your-pants humor that you’ve come to expect from Meredith Masony, but with nuggets of parenting wisdom and insight tucked inside every page. If laughter is the best medicine, then this book should be prescribed for every parent who has ever felt weary.”
—Mary Katherine Backstrom, author of Mom Babble

“For those mamas who are still doubting themselves or don’t fully  love every inch of their bodies, Meredith has an important message.” —POPSUGAR.COM