A Conspiracy So Immense: The World of Joe McCarthy (Paperback) 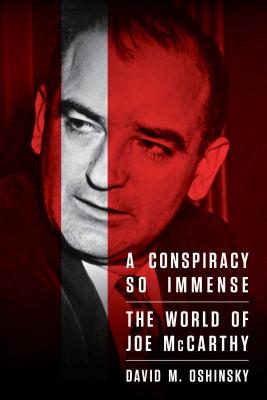 Few politicians in our history have had the emotional impact of Joe McCarthy and acclaimed historian David Oshinsky’s chronicling of his life has been called both “nuanced” and “masterful.”

Here, David Oshinsky presents us with a work heralded as the finest account available of Joe McCarthy’s colorful career. With a storyteller’s eye for the dramatic and presentation of fact, and insightful interpretation of human complexity, Oshinsky uncovers the layers of myth to show the true McCarthy. His book reveals the senator from his humble beginnings as a hardworking Irish farmer’s son in Wisconsin to his glory days as the architect of America’s Cold War crusade against domestic subversion; a man whose advice if heeded, some believe, might have halted the spread of Communism in Southeast Asia and beyond.

A Conspiracy So Immense reveals the internal and external forces that launched McCarthy on this political career, carried him to national prominence, and finally triggered his decline and fall. More than the life of an intensely—even pathologically—ambitious man however, this book is a fascinating portrait of America in the grip of Cold War fear, anger, suspicion, and betrayal. Complete with a new foreword, A Conspiracy So Immense will continue to keep in the spotlight this historical figure—a man who worked so hard to prosecute “criminals” whose ideals work against that of his—for America.

David M. Oshinsky, PhD, is a professor in the NYU Department of History and director of the Division of Medical Humanities at the NYU School of Medicine. In 2005, he won the Pulitzer Prize in History for Polio: An American Story. His other books include the D.B. Hardeman Prize–winning A Conspiracy So Immense: The World of Joe McCarthy, and the Robert Kennedy Prize–winning “Worse Than Slavery”: Parchman Farm and the Ordeal of Jim Crow Justice. His articles and reviews appear regularly in The New York Times and The Wall Street Journal.