Into the Real (TransDimensional Hunter) (Hardcover) 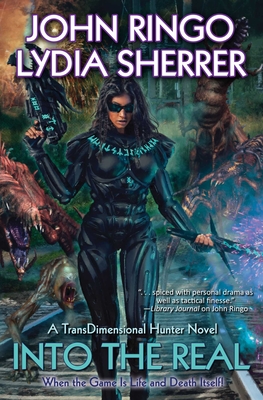 Into the Real (TransDimensional Hunter) (Hardcover)

Lynn Raven may be the boss master of WarMonger 2050 with her online persona of "Larry the Snake," but when the CEO of Tsunami Entertainment personally asks her, as a favor, to beta test a new augmented reality game, she has to face her greatest fear: going outside and dealing with . . . well, people.

As she becomes more immersed in the game, the stakes rise and so do the obstacles. Strife between teammates, a ruthless rival team, and these strange glitches that make it seem like the game algorithm (or maybe “game AI”?) has it in for her. Now she has to face a new fear: is she willing to step into the real to win the future she’s always wanted?

What do you do when a game and real life merge?

About Into the Real:

"I found myself enjoying the story and Raven’s relationship with the AI that’s her guide in the game, and I was invested throughout. It wasn’t so much a coming-of-age story as a growing into and appreciating one’s own skin...  I’m really looking forward to how things will play out from here."—The Magazine of Fantasy & Science Fiction

"Ringo and Sherrer have created a modern day Ender’s Game using the technology of Pokemon Go... The characters are vivid and interesting, and the action is strong enough to carry you along."—Upstream Reviews

"The futuristic world of the gamers and the game itself will interest sf readers....YA: Teens will relate to Lynn, the main character, and if they are gamers, they will enjoy her gamer and VR adventures." --Booklist

About John Ringo:
“. . . the thinking reader’s zombie novel . . . Ringo fleshes out his theme with convincing details . . . the proceedings become oddly plausible.”—Publishers Weekly on Under a Graveyard Sky

“[Ringo’s work is] peopled with three-dimensional characters and spiced with personal drama as well as tactical finesse.”—Library Journal

“. . . practically impossible not to read in one sitting . . . exceedingly impressive . . . executed with skill, verve, and wit.”—Booklist

“Crackerjack storytelling.”—Starlog
John Ringo is the New York Times best-selling author of the Black Tide Rising series, the Posleen War series, the Through the Looking Glass series, and more, including the Troy Rising series, of which Live Free or Die is the first installment. A veteran of the 82nd Airborne, Ringo brings firsthand knowledge of military operations to his fiction.

Lydia Sherrer is the award-winning and USA Today best-selling author of urban fantasy series Love, Lies, and Hocus Pocus—the Lily Singer Adventures. She has most recently written the first in a trilogy of Gamelit novels with New York Times best-selling author John Ringo.