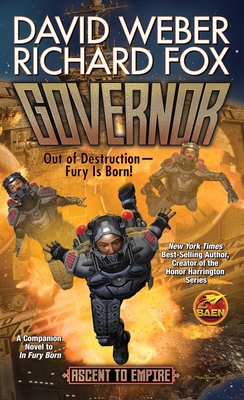 The Terran Republic. The Terran League. Genocidal enemies. Members of the Five Hundred don’t care. They are the social elite of the Heart Worlds, light-years from any threat of attack. Rear Admiral Terrence Murphy is of the Five Hundred. There is no end to how high he can rise in the Republic’s power structure. But the powers-that-be have miscalculated. For Terence Murphy is a man of honor. He intends to stop the killing. Terrence will end fifty-six years of bloodshed and slaughter—and Hell itself rides with him.

About Governor:
"The authors pack the story with both the specs of far-future fighting machines . . . and the hypercompetent, duty-driven warriors who crew them. Fans of old-school military sci-fi should check this out."—Publishers Weekly

“. . . a fun and thrilling standalone from Weber and Holo. . . . Time travel enthusiasts will enjoy the moral dilemmas, nonstop action, and crisp writing.”—Publishers Weekly

About David Weber:
“. . . a balanced mix of interstellar intrigue, counterespionage, and epic fleet action . . . with all the hard- and software details and tactical proficiency that Weber delivers like no one else; along with a large cast of well-developed, believable characters, giving each clash of fleets emotional weight.”—Booklist

“. . . moves . . . as inexorably as the Star Kingdom’s Grand Fleet, commanded by series protagonist Honor Harrington. . . . Weber is the Tom Clancy of science fiction. . . . His fans will relish this latest installment. . . .”—Publishers Weekly

“This entry is just as exciting as Weber’s initial offering. . . . The result is a fast-paced and action-packed story that follows [our characters] as they move from reaction to command of the situation. Weber builds Shadow of Freedom to an exciting and unexpected climax.”—The Galveston County Daily News

“Weber combines realistic, engaging characters with intelligent technological projection and a deep understanding of military bureaucracy in this long-awaited Honor Harrington novel. . . . Fans of this venerable space opera will rejoice to see Honor back in action.”—Publishers Weekly

“This latest Honor Harrington novel brings the saga to another crucial turning point. . . . Readers may feel confident that they will be Honored many more times and enjoy it every time.”—Booklist

“Weber combines realistic, engaging characters with intelligent technological projection. . . . Fans of this venerable space opera will rejoice . . .”—Publishers Weekly
With more than eight million copies of his books in print and 33 titles on the New York Times bestseller list, David Weber is a science fiction powerhouse. In the vastly popular Honor Harrington series, the spirit of C.S. Forester’s Horatio Hornblower and Patrick O’Brian’s Master and Commander live on—into the galactic future. Books in the Honor Harrington and Honorverse series have appeared on 21 bestseller lists, including The Wall Street Journal, The New York Times, and USA Today. Additional Honorverse collaborations include the spin-off miniseries Manticore Ascendant with New York Time best-selling author Timothy Zahn; and with Eric Flint, Crown of Slaves, Cauldron of Ghosts, and To End in Fire contribute to Weber’s illustrious list of New York Times and international bestsellers.

Best known for his spirited, modern-minded space operas, Weber is also the creator of the Oath of Swords fantasy series and the Dahak Saga, a science fiction and fantasy hybrid. Weber has also engaged in a steady stream of best-selling collaborations: the Starfire series with Steve White; the Empire of Man series with John Ringo; the Multiverse series with Linda Evans and Joelle Presby; and the Ring of Fire series with Eric Flint.

Richard Fox is the winner of the 2017 Dragon Award for Best Military Science Fiction or Fantasy novel. He's best known for The Ember War Saga, a military science fiction and space opera series.

His writing draws extensively from his experiences in the United States Army, where he served two combat tours in Iraq and was awarded the Bronze Star, Combat Action Badge and Presidential Unit Citation.

He lives in fabulous Las Vegas with his incredible wife and three boys, amazing children bent on anarchy.

Subscribe to Richard's spam free email list and get free short stories set during the Ember War Saga (and more as they become available) at: