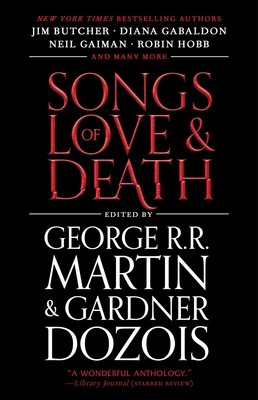 From epic fantasy, post-apocalyptic America, to faerie-haunted rural fields in 18th-century England, to an intergalactic empire, join star-crossed lovers as they struggle against the forces of magic and fate.

A star-studded cross-genre anthology Songs of Love and Death features all-original tales from seventeen of the most prestigious names in romance, fantasy, and science fiction.

George R. R. Martin is the #1 New York Times bestselling author of many novels, including those of the acclaimed series A Song of Ice and Fire—A Game of Thrones, A Clash of Kings, A Storm of Swords, A Feast for Crows, and A Dance with Dragons—as well as Tuf Voyaging, Fevre Dream, The Armageddon Rag, Dying of the Light, Windhaven (with Lisa Tuttle), and Dreamsongs Volumes I and II. He is also the creator of The Lands of Ice and Fire, a collection of maps featuring original artwork from illustrator and cartographer Jonathan Roberts, and The World of Ice and Fire, with Elio M. García, Jr, and Linda Antonsson. As a writer-producer, he has worked on The Twilight Zone, Beauty and the Beast, and various feature films and pilots that were never made. He lives with the lovely Parris in Santa Fe, New Mexico.

Gardner Dozois’s editorial work had received fifteen Hugo Awards and twenty-eight Locus Awards, plus two Nebula Awards for his own writing. He was the editor of the leading science fiction magazine, Asimov’s Science Fiction, for twenty years, and was the author or editor of over a hundred books.

“A wonderful anthology for readers who enjoy crossing the genre lines between fantasy/sf and romance and an excellent introduction to series readers may not have previously tried.” —Library Journal (starred review)

“An impressive collection of authors [organized] around a compelling theme. . . . Fantasy readers looking to branch out could hardly do better. . . .” —Fantasy Literature

“Highly original, sometimes arcane, flights of imagination. The stories are as varied as the authors. . . .” —Romance Reviews Today