The After Collection: After, After We Collided, After We Fell, After Ever Happy, Before (The After Series) (Paperback) 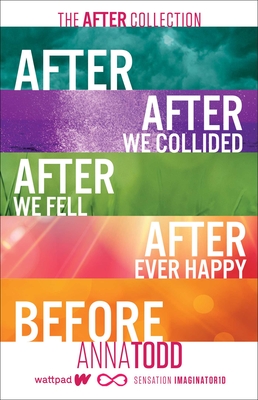 The After Collection: After, After We Collided, After We Fell, After Ever Happy, Before (The After Series) (Paperback)

The inspiration behind the major films After and After We Collided!

From the New York Times bestselling author and Wattpad sensation Anna Todd, “the biggest literary phenom of her generation” (Cosmopolitan), comes the complete collection of her sizzling After series.

After: Once she meets Hardin, good girl Tessa’s life will never be the same. He is rude, cocky, and the exact opposite of her reliable boyfriend back home—she should hate him, but then she finds herself alone with him one night. What follows is a passionate but tempestuous romance that turns Tessa’s usually calm and traditional world upside down.

After We Collided: Tessa and Hardin’s tentative relationship takes a devastating turn when a dark secret from Hardin’s mysterious past surfaces. Can Tessa manage to move on and forge a new life for herself? Or will Hardin be able to change enough to win back his one true love?

After We Fell: Hardin isn’t the only one with secrets. Everything Tessa thought she knew about her life goes up in smoke and she has no idea if Hardin will be willing to stay with her. Trapped in a seemingly unending cycle of jealousy and rage, neither has any idea if their passion is enough to keep their relationship alive.

After Ever Happy: Each new challenge Tessa and Hardin face only makes their passionate bond stronger and stronger. But when a revelation about the past shakes Hardin’s impenetrable façade to the core—and then Tessa suffers a tragedy—will they stick together again or be torn apart?

Before­: The ups and downs of Tessa and Hardin’s relationship are explored by others in their lives before, during, and after the events of the series. Finally, Hardin reveals his own perception of his life with Tessa, which will completely change how you see the famous brooding boy and the angel who loved him.
Anna Todd (writer/producer/influencer) is the New York Times bestselling author of the After series, which has been released in thirty-five languages and has sold more than twelve million copies worldwide, becoming a #1 bestseller in several countries. Always an avid reader, Todd began writing stories on her phone through Wattpad, with After becoming the platform’s most-read series with over two billion reads. She has served as a producer and screenwriter on the film adaptations of After and After We Collided, and in 2017, she founded the entertainment company Frayed Pages Media to produce innovative and creative work across film, television, and publishing. A native of Ohio, she lives with her family in Los Angeles.