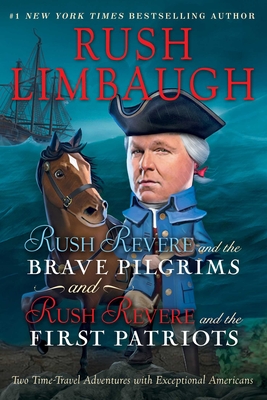 Okay, okay, my name’s really Rusty—but my friends call me Rush Revere because I’ve always been the #1 fan of the coolest colonial dude ever, Paul Revere. Talk about a rock star—this guy wanted to protect young America so badly, he rode through those bumpy, cobblestone-y streets warning everyone that “the British are coming!” On a horse. Top of his lungs. Wind blowing, rain streaming...

Well, you get the picture. But what if you could get the real picture—by actually going back in time and seeing with your own eyes how our great country came to be and meeting the very people who made it all happen? Hold on to your pointy triangle hats, because you can—with me as your tour guide across time.

First, we’ll join a shipload of brave families journeying on the Mayflower in 1620. Then we’ll head to Boston in 1765 as cries for revolution are growing louder and louder. With plenty of fascinating facts and thrilling action, these books are perfect for exceptional young patriots just like you!
Rush Limbaugh was the host of The Rush Limbaugh Show—the nation’s highest-rated talk radio program, with an audience of more than 30 million—and was the #1 New York Times bestselling author of The Way Things Ought To Be; See, I Told You So; and the Adventures of Rush Revere book series. Visit OfficialRushLimbaugh.com.