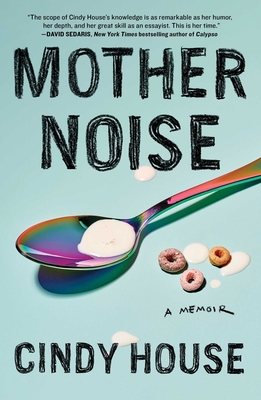 
Available at One of Our Locations
A poignant, “raw[,] and tender” (The New York Times Book Review) memoir told in essays and graphic shorts about what life looks like twenty years after recovery from addiction—and how to live with the past as a parent, writer, and sober person—from a regular opener for David Sedaris.

In the opening of this “unexpectedly uplifting...masterfully crafted memoir” (Shelf Awareness, starred review) Cindy, twenty years into recovery after a heroin addiction, grapples with how to tell her nine-year-old son about her past. She wants him to learn this history from her, not anyone else; but she worries about the effect this truth may have on him. Told in essays and graphic narrative shorts, Mother Noise is a stunning memoir that delves deep into our responsibilities as parents while celebrating the moments of grace and generosity that mark a true friendship—in this case, her benefactor and champion through the years, David Sedaris.

This is a powerful memoir about addiction, motherhood, and Cindy’s ongoing effort to reconcile the two. Are we required to share with our children the painful details of our past, or do we owe them protection from the harsh truth of who we were before?

With dark humor and brutal, clear-eyed honesty, Mother Noise is “a full-throated anthem of hope, [that] lends light to a dark issue” (Publishers Weekly, starred review).
Cindy House is an essayist, short story writer, artist, and a regular opener for David Sedaris on his tours across the country. She studied at the School of the Art Institute of Chicago and earned an MFA from Lesley University in 2017. She lives in New Haven, Connecticut, with her son.
"Raw and tender... Mother Noise feels lovingly labored over, expertly whittled and chiseled into its current frank form...  Here's a book not about how you rebuild yourself through writing but about how writing itself can be a kind of rebuilding, a reassembling of your past mistakes."
—New York Times Book Review

“Unexpectedly uplifting… In her masterfully crafted memoir, House includes stories of despair and joy. Ultimately, the narrative she shared with her son also brings hope to her readers.”
—Shelf Awareness (Starred Review)

"Exalting art, our families, and ourselves, House's writing is serious with room for lightness, polished without sacrificing sincerity. Memoir devotees will find it hard to put down."
—Booklist (Starred Review)

“A brutal story of heroin addiction gives way to a heartening look at motherhood in this brilliant debut from essayist House… A full-throated anthem of hope, this lends light to a dark issue.”
—Publisher's Weekly (starred review)

“The best essays are powerhouses…a grim yet hopeful portrait of one woman’s emergence and triumph over drug dependency."
—Kirkus Reviews

“The scope of Cindy House’s knowledge is as remarkable as her humor, her depth, and her great skill as an essayist. This is her time.”
—David Sedaris, New York Times Bestselling author of Calypso

“Fresh, funny, and fearless, Cindy House bares her soul in MOTHER NOISE and offers a hope-filled look at life after addiction -- as a parent, as an artist, and as a citizen of the world. The humanity and honesty here are exceptional - and leavened with a delicious humor."
—Bill Clegg, New York Times Bestselling author of Did You Ever Have a Family and Portrait of An Addict As A Young Man