The Way Things Ought to Be (Paperback) 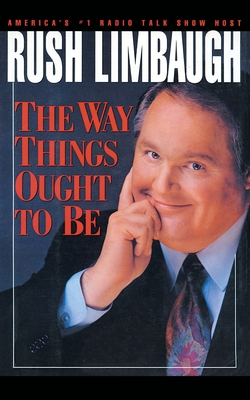 The Way Things Ought to Be (Paperback)


Ships to Our Store in 1-5 Days
#1 New York Times bestselling author and #1 radio talk show host Rush Limbaugh offered a way of life for millions of avid and devoted listeners. Every day this comic conservative of the airwaves with “talent on loan from God”​​ entertained, provoked, and persuaded friends and enemies alike in a no-holds-barred radio show that drew one of the largest audiences in radio history.

Using personal anecdotes, Limbaugh reveals the major influences on his life and views, and blasts off on all the leading issues of our day. Nothing escapes his acerbic wit and charm as he proves why he stayed on the cutting edge of societal evolution and the epitome of morality and virtue.

Tackling such topics as The Homeless Fraud and The Media to Feminazis and Environmentalist Wackos, Rush Limbaugh shows that he is a provocative conservative and showman who was “documented to be almost always right 97.9% of the time” about The Way Things Ought To Be.
Rush Limbaugh was the host of The Rush Limbaugh Show—the nation’s highest-rated talk radio program, with an audience of more than 30 million—and was the #1 New York Times bestselling author of The Way Things Ought To Be; See, I Told You So; and the Adventures of Rush Revere book series. Visit OfficialRushLimbaugh.com.