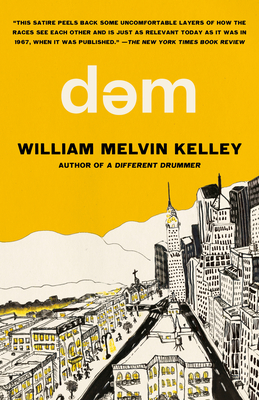 A searing, provocative satire by one of the most important African-American novelists of the twentieth century that lays bare the abiding racism and the legacy of slavery on the psyche of white America.

Mitchell Pierce is a well-off New York ad executive whose marriage is falling apart. He no longer feels any passion for his pregnant wife, Tam, and even feels estranged from his toddler son, Jake. Mitchell is trapped in an unrewarding and loveless life, and though domestic violence isn't in his character, it is never very far away, either.

Mitchell's life will irrevocably change one day, though, when a young man appears at his apartment door to pick up the family's black maid, Opal, for a date. Cooley it turns out is not a stranger to the household. The twins that Tam is carrying are a result of superfecundation—the fertilization of two separate ova by two different males. So when one child is born black and the other white, Mitchell goes on a quest to find Cooley and make him take his baby.

In the tradition of Brer Rabbit trickster tales, dem enacts a modern-day fable of turning the tables on the white oppressor and inverting the history of miscegenation and subjugation of African Americans.

WILLIAM MELVIN KELLEY was an African American novelist and short-story writer. He was a writer in residence at the State University of New York at Geneseo and a teacher at The New School and Sarah Lawrence College. He was the winner of the Anisfield-Wolf Book Award for lifetime achievement and the Dana Reed Prize for creative writing. He is the author of A Different Drummer. He died in 2017.

“One of the outstanding comic novels of the [sixties].” —The Boston Globe

“This satire peels back some uncomfortable layers of how the races see each other and is just as relevant today as it was in 1967, when it was published.” —The New York Times Sunday Book Review

“In dem the search for absolutes and the revelation of chaos beneath apparent order give this novel a mythopoetic resonance even as the concrete devices of fabulation and the dialectics of bitter, blue-black satire undermine the mythologies upon which the disintegrating lives of the white central characters depend.” —Johns S. Wright