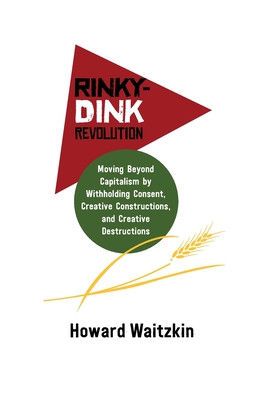 Answering the question of how to get from A to B, capitalism to post-capitalism, is a task that we "audaciously" need to pursue now. This pamphlet is one among several others, intended to clarify our struggle 1) to bring down capitalism; and 2) to create a path toward eco-socialism.

Those of us oppressed by capitalism engage in some peculiar forms of actions and inactions. In our actions, we take part in struggles to improve key problems generated by capitalism without confronting capitalism. In other words, our actions confront effects rather than causes.

In addition to our contradictory actions, our inactions involve consent. We consent by not challenging or even trying to change our simple economic behaviors that perpetuate the capitalist economic system. As a result, we ordinary people continue to serve as the main financiers of the capitalist system.

Why do oppressed people consent to their oppression? Repression usually is not enough, as Gramsci observed while imprisoned by Italian fascism. "Hegemonic" ideas explain and justify the oppressive circumstances of our lives.

Rinky-dink revolution involves actions and inactions that are easy, safe, mundane, unglamorous, and feasible within every person's life. The history of revolutions shows that the activists who bring them about number much fewer than countries' entire populations. The estimate of 7 to 11 million people required to achieve revolutionary transformation in the United States comes from a simple calculation, which may be off, but probably not way off. "We" who struggle against capitalism have become much more diverse and numerous than the protagonists envisioned by Marx and Engels. "They" who fight to preserve capitalism make up a tiny minority of the world's population. Revolutionary strategy requires clarifying what specific characteristics of capitalism are oppressive and have to go, as opposed to what characteristics of social and economic organization are not oppressive and can stay. What post-capitalist society looks like has become much clearer. Rinky-dink revolution includes withholding consent to processes that capitalism needs to maintain itself and grow, plus several creatively constructive and destructive efforts in which millions of people, but still a minority of the population, participate.

The transition to post-capitalism is already happening throughout the world in the creative construction of communal organizations that govern themselves and that act to assure the survival and well-being of their participants. Moving beyond the capitalist state, including the welfare state as part of the capitalist state, entails moving beyond the state itself. The solidarity economy first of all finds ways to create cheap, small-scale, cooperative, pleasant, and comfortable housing units that require very little money, with collaborative solutions to exploitative rent, debt, taxes, and insurance. Second, communal organizations solve the food problem through local production and distribution of nutritious food, achieving independence from capitalist agriculture.