What is Communism?: with Capitalism and Planning and The Inevitability of Communism (Paperback) 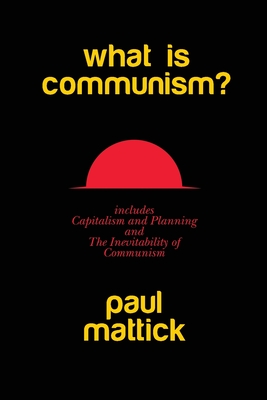 What is Communism? is a small book comprised of three essays by Paul Mattick written from 1934 to 1936, What is Communism?, Capitalism and Planning, and The Inevitability of Communism. In these essays, Mattick, of course, examines what communism is, what planned economy is, and gives a critique of Sidney Hook's understanding of Marx's Capital (Das Kapital) to give a lens into what communism is.

Born in Pomerania in 1904 and raised in Berlin by class-conscious parents, Mattick was already at the age of 14 a member of the Spartacists' Freie Sozialistiche Jugend. In 1918, he started to learn as a toolmaker at Siemens, where he was also elected as the apprentices' delegate on the workers' council of the company during the German revolution.

Implicated in many actions during the revolution, arrested several times and threatened with death, Mattick radicalized along the left and oppositional trend of the german communists. After the 'Heidelberg' split of the KPD(Spartacus) and the formation for the KAPD in the spring of 1920, he entered the KAPD and worked in the youth organization Rote Jugend, writing for its journal.

Paul Mattick died in February 1981 leaving an almost finished manuscript for another book, which was laler edited and published by his son, Paul Mattick Jr., as 'Marxism - Last Refuge of the Bourgeoisie?'