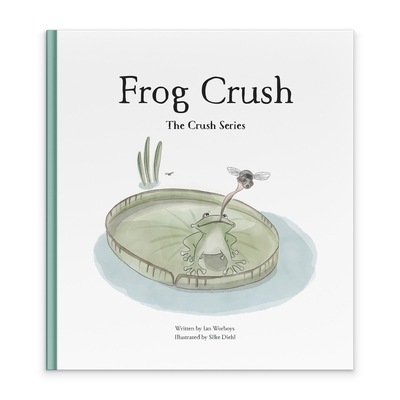 
Ships to Our Store in 1-5 Days
Frog Crush presents a scene from life in the African savanna and it follows the short journey of five animals in the midday sun, while they are trying to find something juicy and tasty to eat.

The book opens with the sight of a Frog singing on a lily pad and who is feeling particularly hungry. An emotive Fish who is sniffing away, a furry Fly, and a two-meter-long Crocodile who is dreaming of an ocean cruise all turn up in the story. Mr. Hippo, the lead character, is one of the biggest and happiest characters in the whole of The Crush Series as he waddles along singing his favorite song. The facial expressions of the animals are full of character and wit and the image at the end with the accidental crush between a Frog, a Fish, a Fly, a Hippo, and a Crocodile all looking dazed and confused, makes the afternoon in the savanna priceless as everyone escapes unhurt, although still hungry.

Frog Crush has a positive message, that something good can come out of an unexpected situation. It creates a lively discussion point where parents and teachers can explore with their children and learn about how animals live in Africa. It also allows a conversation that can tackle more serious themes about the circle of life and the need for animals to hunt smaller animals.

Imagine a world where colorful animals live and play enjoying the sun and looking for food while trying to avoid becoming lunch themselves. The Crush Series demonstrates interconnectedness by sharing humorous stories in which each animal's action can affect all the characters in the story. The books are full of hilarious situations where the unexpected can and will happen.
As a father of four, Ian Worboys found himself looking for fun books preferably written in rhyming poetry, to help him connect to his children, entertain them and, more importantly, develop their imagination and creativity. Unable to find such books on the shelves of his local bookshop, he started writing the stories himself. Some 100 poems later the Crush Series began. As an interior architect and mother of three children, Silke Diehl learned that playful parenting is the key to children's hearts and minds. Much like Ian, Silke had brought up her three children to express their feelings and to be creative. Silke's gentle, charming, and humorous illustrations brought Ian's stories to life and it was Silke who had the inspiration to add a song to each book.