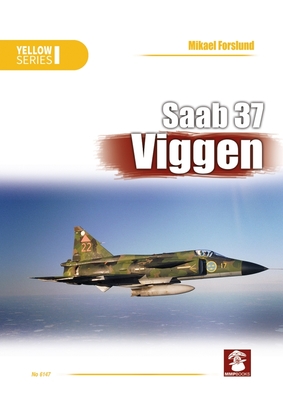 
Coming Soon - Available for Preorder Now
The Saab 37 Viggen is a Swedish single-seat, single-engine, short-medium range combat aircraft. Development work on the type was initiated at Saab in 1952 and resulting aircraft performed its first flight on 8 February 1967. Viggen entered service in 21 June 1971. It was the first canard design produced in quantity.

Several distinct variants of the Viggen were produced to perform the roles of strike fighter (AJ 37), aerial reconnaissance (SF 37), maritime patrol aircraft (SH 37) and a two-seat trainer (SK 37). In the late 1970s, the all-weather fighter-interceptor aircraft JA 37 variant was introduced. In November 2005, the Viggen was retired from service by the Swedish Air Force.

This book is the most comprehensive on the Viggen yet published in English, with: numerous photographs of the aircraft in service, several of which have never been published before; walkaround photographs of the preserved aircraft; illustrations from contemporary manuals; and original color artwork.