Democratic Desert: The War in Syria [With CDROM] (Hardcover) 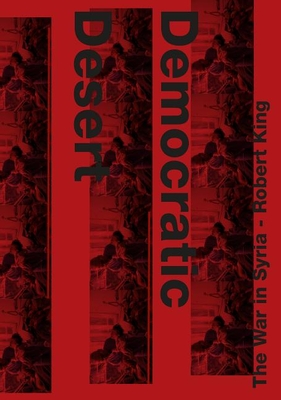 Democratic Desert: The War in Syria [With CDROM] (Hardcover)


Currently Unavailable
Since February of 2012 Robert King has documented an unprecedented tragedy of the blatant targeting of civilians and hospitals by the al-Assad regime as well as a number of other serious human rights violations and war crimes. As the conflict is entering its third year there has been little if any international support from democratic leaders to end the killing despite the fact that over 100,000 Syrians have been killed, as well as over 28,000 have gone missing. 4.5 million Syrians are dispaced within their country and over 1.5 million Syrians are now refugees in neighboring countries. As a photographer it is not my job to aspire towards aesthetically pleasing images of war that are palatable to the public or the photographic community. I have found, many viewers find it easier to condemn the image maker rather than the perpetrators of war crimes against humanity. Democratic Desert is the first comprehensive photo journlistic book about the war in Syria. Robert King entered the country when almost all conflict photographers left, and he stayed. Therefore King is the only photographer able to show us what really happens there. This book shows a gruesome story without any constraint. In contains a DVD with a forceful documentary film made by King during his stay in Syria.
Robert King, native of Memphis, Tennessee is an award winning photojournalist with no formal education in the field of journalism. King is a former art student with a Bauhaus foundation who graduated from Pratt Institute located in Brooklyn, New York.

He has worked around the world for leading publications from war torn Bosnia, Afghanistan, Chechynya, Rwanda, Kosovo, Albania, Georgia, Armenia, Azerbaijan, Zaire, South Africa, Russia, Iraq, and Mexico. His work is, and has been published in "Life, The New York Times, Time, Newsweek, The Guardian, Rolling Stone, Stern, Paris Match "and just about every other leading global publication. The work of Robert King can also be found in museums and private collections from around the world. His career as a photojournalist has been chronicled in the award-winning documentary "Shooting Robert King. "