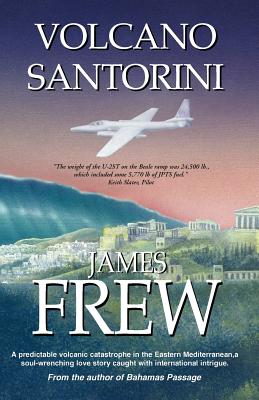 
Ships to Our Store in 1-5 Days
"Danish scientists studying ice in Greenland say they have found evidence showing that the great volcanic eruption that destroyed the island of Thera and its thriving Minoan civilisation occured in 1615 BC." Walter Sullivan., NY Times, August 6th, 1987 In 1628 BC., following decades of volcanic activity, a tidal wave cresting 400 feet all but decimated the Minoan civilisation, sparing only the shepherds in the hills of Crete. This volcanic eruption gave rise to the golden legends of Homer and later Plato, when he theorized the epic of mythical Atlantis. But given the shifting tetonic plates, the ancient volcano erupts once again in the 21st. Century to threaten the Mediterranean. Like Bahamas based author Authur Hailey, Frew, in this trilogy of an American U2 pilot sponsored by the UN, brings an exciting bird's eye view of the pending catastrophe. Frew excels as a ' you are there' storyteller in this, his latest ' white knucle' thriller. With three story lines established, Frew skilfully draws the analogy of a Greek heiress bride, her occult nature seeded from Minoan times. High level espionage, a revengeful murder... the horrendous aftermath when the volcano blew its guts to the Agean Sea; the tragedy of the pilot searching for his wife in the highlands of mysterious Crete, are all captured in this epic story of espionage and action in the troubled Middle East.