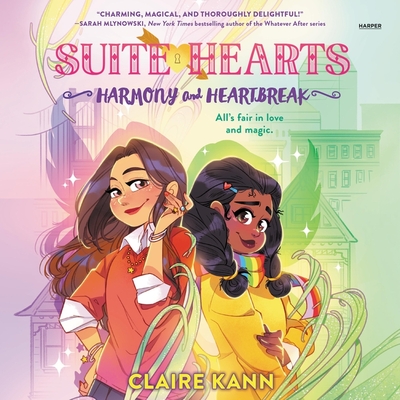 The first in a new series about magical matchmakers, Suitehearts #1: Harmony and Heartbreak is a feel-good light romance about two 13-year-old cousins and their first solo attempts at creating enchanted love connections. Perfect for young readers who love Whatever After, The Jumbies, and The Princess Diaries.

Cousins Rose and Cora Seville aren't your typical eighth graders. They are matchmakers-in-training, learning how to magically make love connections out of San Francisco's Hotel Coeur, where they live in the penthouse suite. As young Fledglings, Rose and Cora must perfect their charms and enchantments to pass a test that will determine their future, but they are not prepared for all the drama ahead

Confident, cool Rose, the most promising Fledgling of her generation, thinks her magic can help her handle any assignment that's thrown at her. But when she is faced with a bitter rival and headstrong Kindling, will she be able to rise to the challenge?

As for kind-yet-complicated Cora, she's usually in her cousin's shadow. But new powers that allow her to see others' emotions might make her a secret weapon in the matchmaking world. Will Cora's special abilities help or hurt her when a crush on a boy puts her matchmaker ethics on the line?

Full of magic and mishaps, Suitehearts is a new series from award-winning storyteller Claire Kann that will keep readers smiling and wishing for more.