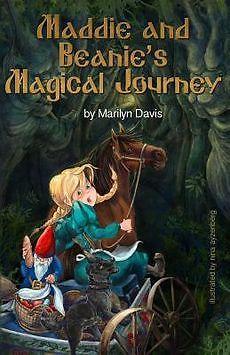 Marilyn Davis will be at Bank Square Books for a book signing on January 11 from 1-3pm.
Maddie moves in with gran determined to help out when Maddie's grandfather dies. They find an abandoned pony that Maddie's determined to keep-even if it means going up a powerful baroness just as determined to make Beanie hers. That's only the first adventure in The Maddie & Beanie Trilogy, which chronicles the magical journeys of Maddie, Beanie, Maddie's dog Rufus, and an elf named Elfie. It's all about friendship, one that's first kindled when Maddie comes across the pony. Beanie's fur is unkempt and brambles hang from his legs, but Maddie sees the pony's brave soul in his bright eyes. They need that braveness when they become separated and it's up to Maddie to save her friend. But it's tough to have courage when your friend's not there and needs your help. That's where Elfie comes in; his magical mischief is just what's needed to save the day. After all, when you have friends by your side, you can do anything. The loyal comrades set out again to see if that's true as they are called upon to save a young prince who goes missing. Will they be able to make sure the prince takes his rightful place as heir to the throne? There's more to be learned about magic and family alike. That knowledge becomes a gift to be treasured among other gifts Maddie gets on her birthday. Maddie & Beanie's Trilogy features Maddie & Beanie's Magical Journey, The Rescue, and Maddie's Solar Return. Each book centers on friendship and magic while encouraging a love of nature.
It's a set of books best suited for girls aged 9-12 years old who love fairies, elves, and animals-especially ponies.
It's also a purchase that makes a difference as author Marilyn Davis donates a portion of her earnings to animal shelters and Connecticut's endangered Second Chance Corral animal rehabilitation program.