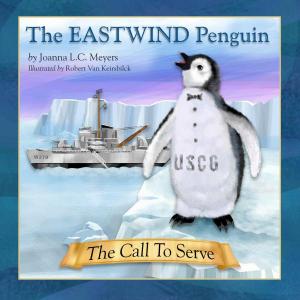 Bank Square Books presents an open house book signing with Joanna L.C.Meyers for her new book The Eastwind Penguin. This event is free and open to the public.

A brave baby penguin joins the U.S. Coast Guard in this fanciful celebration of the military branch from team Meyers and Van Keirsbilck (The Legend of Objee, 2013).

A mother and father penguin are proud of their son-to-be, still inside his egg. When the adorably puffy penguin chick hatches (in a painting by Van Keirsbilck sure to make readers say “Awww!”), he begins to develop a strong sense of adventure. Warned to stay away from Seal Rock, the baby penguin is sure he can outswim any old seal. When he dares to try it, his worried mother races to the water only to find her son proud of his own accomplishments. Soon, baby penguin is off on another adventure: mountain climbing. From atop the mountain, he discovers the Coast Guard icebreaker Eastwind, and though he’s initially frightened, he soon warms up to the crew, listening to their stories of brave rescues. When baby penguin eventually returns home, he learns his parents went up the mountain to find him, and now they need a rescue! Leading the penguin team and joined by his brave Coast Guard shipmates, he rescues his parents and leaves home to join further Coast Guard rescues. Meyers’ text is dense, with challenging vocabulary words for emerging readers (“tobogganed,” “gang plank”), but Van Keirsbilck’s penguin paintings will entice animal lovers, and his mixed painted and drawn images of the Coast Guard may inspire interest in that organization.

A clever spin on coming-of-age adventures with Antarctic appeal.