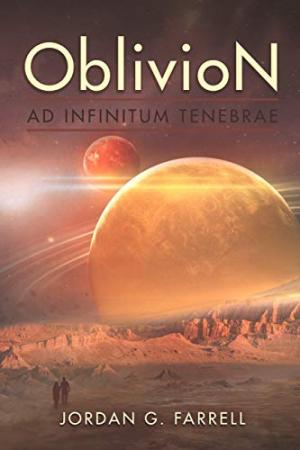 Bank Square Books presents an evening with Jordan G. Farrell, the author of OblivioN: Ad Infinitum Tenebrae. Jordan will talk and then answer questions. This event is free and open to the public.

The long-awaited sequel to OblivioN: Ad Magnificum Volumina is here! Humanity has lost its way and is nearly extinct. But for a lone survivor from the Europan disaster five hundred years before, the Titans are the only people left alive in the Solar System. A rugged group of scrappy survivors of the Ripping, the Titans have fallen prey to humanity’s baser instincts for survival, power and desperate need. The Three Regions, Shangri-La, Kraken Mare and Xanadu have succumbed to war at the hands of a megalomaniacal dictator bent on enslaving them all, Cassius Boll. His bent on world domination throws what’s left of civilization into darkness where faith and hope for a bright future grows darker every moment. But two survivors of the onslaught, Grace Blieh Amadán Dubh and Manannán mac Lir, leaders in exile of the defeated, unalike in every way, run for their lives across the tholin-dunes and methane rivers and lakes of Shangri-La to find refuge in a place only known in a children’s story that history has long forgotten.

Along the way, they find strength in each other, faith in the future, and appreciation for the strength of human character, while learning how the sacrifices of the past will meet in the present to light a candle of hope for the future.“…strong and compelling, and the vast landscapes…are beautifully drawn and add(s) a superior sequel that could easily be read and enjoyed as a standalone too.” K.C. Finn for Readers’ Favorite“ From the moment I started reading this novel, I knew that it was going to be special.” Rabia Tanveer for Readers’ Favorite“…well-plotted, skillfully written, and packed with action. A great treat for fans of sci-fi.” Romuald Dzemo for Readers’ Favorite

Jordan G. Farrell comes from the northeastern United States, where he lives with his wife Michele, and his family in rural Connecticut. His background is varied as he has reinvented himself many times, managing multiple careers while pursuing several graduate degrees at the same time. Today, he manages his career in finance, while pursuing his creative endeavors, of which writing has been a continual part throughout his life. While pursuing a Doctorate in Organizational Behavior, he honed his writing technique so that complex concepts could be communicated simply and imaginatively. His first love has always been an occupation of expressive creativity through art, music and writing. His interests span from history and religion, to chemistry, astronomy and cosmology. His broad range of interests and pursuits pride him a unique perspective of the world and come through in this latest work, to share and enjoy.

The long-awaited sequel to OblivioN: Ad Magnificum Volumina is here Humanity has lost its way and is nearly extinct. But for a lone survivor from the Europan disaster five hundred years before, the Titans are the only people left alive in the Solar System.