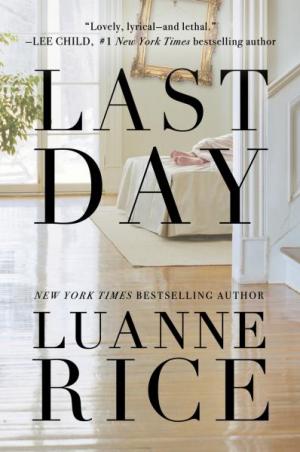 Bank Square Books presents a book launch for bestselling author Luanne Rice's new novel Last Day. Luanne will be in conversation with Rick Koster of The Day as part of a new book club, Read of the Day, co-hosted by The Day and Bank Square Books. This event is free and open to the public.

From celebrated New York Times bestselling author Luanne Rice comes a riveting story of a seaside community shaken by a violent crime and a tragic loss.

Years ago, Beth Lathrop and her sister Kate suffered what they thought would be the worst tragedy of their lives the night both the famous painting Moonlight and their mother were taken. The detective assigned to the case, Conor Reid, swore to protect the sisters from then on.

Beth moved on, throwing herself fully into the art world, running the family gallery, and raising a beautiful daughter with her husband Pete. Kate, instead, retreated into herself and took to the skies as a pilot, always on the run. When Beth is found strangled in her home, and Moonlight goes missing again, Detective Reid can't help but feel a sense of d j vu.

Reid immediately suspects Beth's husband, whose affair is a poorly kept secret. He has an airtight alibi--but he also has a motive, and the evidence seems to point to him. Kate and Reid, along with the sisters' closest childhood friends, struggle to make sense of Beth's death, but they only find more questions: Who else would have wanted Beth dead? What's the significance of Moonlight?

Twenty years ago, Reid vowed to protect Beth and Kate--and he's failed. Now solving the case is turning into an obsession . . .

Luanne Rice is the New York Times bestselling author of thirty-four novels that have been translated into twenty-four languages. In 2002, Connecticut College awarded Rice an honorary degree, and she also received an honorary doctorate from Saint Joseph College. In June 2014, she received the 2014 Connecticut Governor’s Arts Award for excellence as a literary artist.

Several of Rice’s novels have been adapted for television, including Crazy in Love, for TNT; Blue Moon, for CBS; Follow the Stars Home and Silver Bells, for the Hallmark Hall of Fame; and Beach Girls, for Lifetime.

Rice is a creative affiliate of the Safina Center, an organization that brings together scientists, artists, and writers to inspire a deeper connection with nature—especially the sea. Rice is an avid environmentalist and advocate for families affected by domestic violence. She lives on the Connecticut Shoreline.

From celebrated New York Times bestselling author Luanne Rice comes a riveting story of a seaside community shaken by a violent crime and a tragic loss.