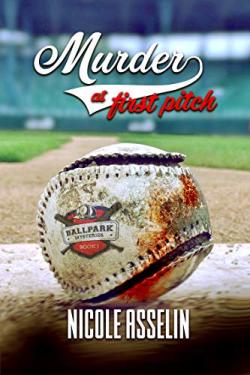 32-year-old Madeline Boucher’s grandfather instilled a love in the Boston Red Sox into her from an early age and increased that love by purchasing a local Independent League Baseball team, the Abington Armadillos. After losing her corporate job in Boston, Madeline realizes her best option is to join the family baseball business. As the new “Social Media Director” for the team, Madeline attends her first business function and witnesses an argument between her brother Ben and a strange man. A few days later when walking the ballpark during her early morning hours, she finds the body of a man beaten to death with a baseball bat in the Visitor’s Dugout. It was the man her brother was arguing with at the party. Madeline is concerned that her brother would be considered a suspect.

Through the local detectives and Davis - the head of security for the ballpark - she learns the victim is Christopher Dailey, a local baseball scout and prior felon. When her brother is arrested and taken to the police station, she realizes she needs to figure out who the real culprit is, so her brother doesn’t take the fall for something she knows he didn’t do.

Nicole Asselin grew up a Navy Brat, and spent her formative high school years in the middle of Pennsylvania but always identified with her New England roots. Nicole’s family is originally from Connecticut, and her Grandpa Asselin introduced her into the Red Sox nation where she has been a member for her whole life. Her Grandma Asselin introduced her to the world of mystery novels. Now those two loves are combined into her new Ballpark Mystery series. Nicole graduated from Curry College in Milton Mass with a degree in English/Creative Writing, minoring in Dance in 2004. She also attended George Mason University and received a Master’s in Arts Management. She worked in the Government sector for over ten years before transitioning to Healthcare. Now working in just outside of Boston as a Technical Writer, she lives on the South Shore of Massachusetts with her three cats Julia, Jacques, and Madeline (no relation to the main character of her book).

Nicole is a current member of Sisters in Crime (National and New England) and the Mystery Writers of America. She sits on the Board of Directors for the NE branches of both groups as Social Media Liaison. She’s attended several conferences in the past few years to study the craft including Malice Domestic, Bouchercon, and the NE Crime Bake. Her short story, “Mile High Murder” can be found as part of Z Publishing’s “America’s Emerging Suspense Writers: East Region” published in early 2019.
Event date:
Sunday, November 24, 2019 - 1:00pm to 3:00pm
Event address:
Bank Square Books
53 W Main St
Mystic, CT 06355

32-year-old Madeline Boucher's Grandfather instilled a love in the Boston Red Sox into her from an early age and increased that love by purchasing a local Independent League Baseball team, the Abington Armadillos. After losing her corporate job in Boston, Madeline realizes her best option is to join the family baseball business.