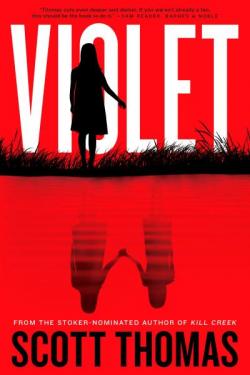 Bank Square Books presents an author discussion and book signing with Scott Thomas, the author of the new book Violet. This event is free and open to the public.

For many children, the summer of 1988 was filled with sunshine and laughter. But for ten-year-old Kris Barlow, it was her chance to say goodbye to her dying mother.  Three decades later, loss returns―her husband killed in a car accident. And so, Kris goes home to the place where she first knew pain―to that summer house overlooking the crystal waters of Lost Lake. It’s there that Kris and her eight-year-old daughter will make a stand against grief.  But a shadow has fallen over the quiet lake town of Pacington, Kansas. Beneath its surface, an evil has grown―and inside that home where Kris Barlow last saw her mother, an old friend awaits her return.

Scott Thomas is the Stoker-nominated author of Kill Creek, which was selected by the American Library Association's reader committee as the top horror book of 2017. Originally from Coffeyville, Kansas, Scott attended the University of Kansas where he earned degrees in English and film. He has written TV movies and teleplays for various networks including Netflix, Syfy, MTV, VH1, the CW, Disney Channel, Nickelodeon, and ABC family. Scott was nominated for a Daytime Emmy for his work on R.L. Stein's The Haunting Hour. He lives in Sherman Oaks, California with his wife and two daughters. Violet is his second novel.
Event date:
Tuesday, October 15, 2019 - 6:30pm
Event address:
Bank Square Books
53 W Main St
Mystic, CT 06355

"The sheer, skin-crawling fright is masterful. Thomas has crafted an indelible story...all wrapped in a supernatural shroud that unfurls from the heart of America. Whether or not thoughts can breathe, books certainly can, and Violet does exactly that." --Jason Heller, National Public Radio