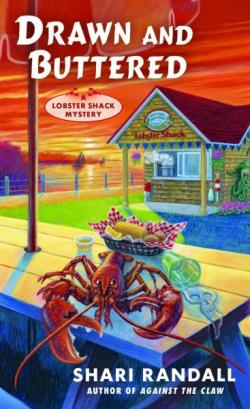 Bank Square Books presents an open house book signing with local author Shari Randall for her new Lobster Shack Mystery book Drawn and Buttered. This event is free and open to the public.

Drawn and Buttered is the third book in a wonderfully satisfying cozy mystery series set at the Lazy Mermaid Lobster Shack in coastal New England.

With high season behind them, ballerina on-the-mend Allie Larkin and Aunt Gully are finally lying low. But then an unexpected guest arrives at the lobster shack: a crustacean so huge he’s dubbed Lobzilla around Mystic Bay and on social media. Soon, with everyone showing up for a peek in their tank, Allie and Aunt Gully have more on their plate than they can handle.

Meanwhile, another local establishment finds itself in hot water. In exclusive Rabb’s Point, a strange burglary breaches the elegant home of Royal Parrish. Allie takes it upon herself to help with the investigation but, before she can get to the bottom of the case, another alarm sounds: the Lazy Mermaid’s Lobzilla has gone missing and is on the loose! And bodies are beginning to pile up. . .

A librarian and military wife, SHARI RANDALL lives in a mid-century money pit in Connecticut. When she’s not committing murder (on the page, of course), Shari enjoys walking the beach near her house, traveling and eating the local cuisine, reading, and dancing. When she isn't writing the Lobster Shack Mysteries, she is the Library Liaison for Sisters in Crime.
Event date:
Saturday, March 2, 2019 - 1:00pm to 3:00pm
Event address:
Bank Square Books
53 W Main St.
Mystic, CT 06355

Drawn and Buttered is the third book in a wonderfully satisfying cozy mystery series set at the Lazy Mermaid Lobster Shack in coastal New England.