BSB: Velya Jancz-Urban and Ehris Urban (How to Survive a Brazilian Betrayal) "Mom-ologue" seminar hosted by a mother-daughter author duo 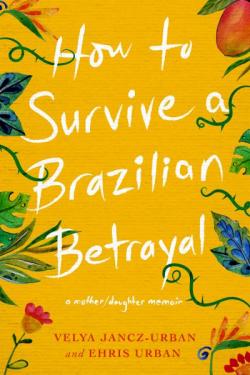 Bank Square Books presents a "Mom-ologue" seminar hosted by mother-daughter author duo Velya Jancz-Urban and Ehris Urban (How to Survive a Brazilian Betrayal). In the book, akooky, gregarious mother and perceptive, poised daughter introduce readers to their offbeat Connecticut family, who follow their hearts to rural Brazil. Broke and broken, they’re forced to return to the United States, and navigate their rebirth in a foreclosed 1770 New England farmhouse. This event is free and open to the public.

Lightening darkness with humor, Velya Jancz-Urban and her 25-year-old daughter, Ehris, introduce readers to their offbeat Connecticut family. Motivated by an 11-year friendship with a charming Brazilian named Jose Geraldo, they spend four years preparing for their move to rural Brazil, where they will run a dairy farm and open an English school. When they follow their hearts to Ponte Nova, an explosion of betrayal leaves them dazed and grieving. Broke and broken, they are forced to return to the United States, and navigate their rebirth in a foreclosed 1770 New England farmhouse. An already strong mother/daughter relationship becomes indestructible when no one else is emotionally available for them.

How to Survive a Brazilian Betrayal is written by a kooky, gregarious mother and perceptive, poised daughter. Blurbed by Christiane Northrup, M.D., author of Mother-Daughter Wisdom, this memoir takes readers along on an unconventional family’s hilariously honest, yet heart-wrenching, journey. Readers will fall in love with their spunk, feel the knockout punches of betrayal along with them, and be rooting for them to get back up off the mat.

Despite their setbacks, Velya (the “charismatic weirdo”) and Ehris (the “sarcastic sophisticated healer”) still firmly believe that there is no growth without change, and that picking up the pieces of a shattered dream is better than having no pieces to pick up at all.

Velya Jancz-Urban lives her life by the adage, “There is no growth without change.” She is a teacher, public speaker, former Brazilian dairy farm owner, and expert on New England’s colonial women. In 2011, Velya and her family bought a foreclosed farmhouse in Woodbury, Connecticut, unaware of what the house would reveal. Behind the walls, surprises and secrets waited to be exposed. Moving into this 1770 farmhouse ignited Velya's interest in the colonial era. She became obsessed with colonial women and created an entertainingly-informative presentation, The Not-So-Good Life of the Colonial Goodwife. Velya teaches a variety of historical/herbal workshops with her daughter, Ehris. Velya owns How Cool Is That?! (Hands-On Science & History), and believes that hands-on learning is for everyone. She has been married for 35 years and is the mother of two grown children. She has a few too many rescue dogs and cats, is happiest with a fresh stack of library books, loves thrift shops, and is passionate about alternative medicine.

Ehris Urban, owner of Grounded Holistic Wellness, believes, “If you’re grounded, you can navigate even the bumpiest roads in peace.” She grew up in a family passionate about holistic medicine. Ehris is a master herbalist and holistic nutritionist, and graduate of the New England School of Homeopathy. Additionally, Ehris is a Flower Essence Therapy practitioner. She became interested in Reiki as a teenager and attained Reiki Master certification at age 17. Ehris is also an Ingham Method reflexologist. She holds a B.A. in Anthropology/Sociology and is a certified ESL teacher. Ehris enjoys beekeeping, tending her organic vegetable and herb gardens, and working in her apothecary. As Grounded Goodwife, Ehris and her mom, Velya, teach a variety of workshops and presentations at their 1770 Woodbury, CT farmhouse, as well as at other venues.