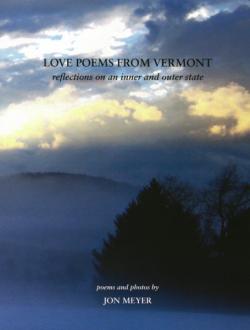 Savoy Bookshop & Café presents a poetry reading and book signing with Jon Meyer, the author of the new book Love Poems from Vermont. This event is free and open to the public.

This book serves as a treasure map to find the visual and poetic delights that give Vermont its reputation as a haven for the soul. Like the intensity of fresh love where the lover thinks of the beloved night and day, Jon Meyer’s Love Poems From Vermont: Reflections On An Inner And Outer State will last long after you put it down and prompt you to pick it up again.

This stunning book contains 66 poignant poems, each imbedded in a photo image of a beautiful place in Vermont. The poems came first, then over the last 16 years the author searched for the right photo image of Vermont for each poem.

Jon Meyer graduated from the University of Vermont, where he studied poetry with Ghita Pickoff Orth, art with Ed Owre, and learned of Avataric advents. He then pursued grad studies at Rutgers (MFA) and Pratt Institute (MID). His writing has appeared in The Village Voice, ARTnews, ARTS, New Art Examiner, Visions Quarterly, CRITS, Q, Dialog, Art New England, and other publications. As Department Chair, at University of Maryland/ Towson U, Jon Meyer led a small team producing a film about one of his students, Dan Keplinger. This film, King Gimp won the Oscar at the 2000 academy awards and appeared on HBO numerous times thereafter.

He has had his art work in a number of international touring exhibitions, including “Outward Bound: American Art At The Brink Of The 21st Century.” This group of artists representing the US, included Rauschenberg, Dine, Lichtenstein, Flack, Ringgold, Grooms, Fish, Close, and Christo, sponsored by the Mobil Foundation. Meyer has given public lectures and workshops across the US, Europe, and Asia.

His work has been exhibited in over 60 solo and group exhibitions (including 18 museum exhibitions) and has his work in 20 museum and public collections in North America, Asia, Europe, and Africa. He has received 12 research grants/ sponsored projects, including a National Endowment for the Arts grant. Meyer has served in administrative capacities in academe (department chair, dean, chief development officer).

His love for Vermont’s mountain peaks and seasons has inspired him since he was a boy. These helped him discover the inner reaches of Vermont and beyond. The thunderous silence of Vermont woods in winter is especially uplifting. He has been writing poetry for over 40 years, and lives in Vermont with his wife Deborah.