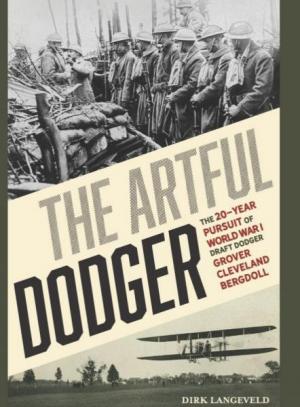 Books and growlers of beer will be available for purchase.

Shortly after he was convicted of dodging the draft in World War I, Grover Cleveland Bergdoll asked the U.S. Army to temporarily release him from prison. He had buried a valuable cache of gold during the war, he claimed, and he wanted to recover it before someone else did.

Bergdoll's subsequent escape would mark the start of a 20-year standoff with the American government.

Although the case is largely forgotten today, Grover Cleveland Bergdoll was a household name for much of the early 20th century. He was the son of a wealthy German-American brewing family, an amateur race car driver, and a skilled aviator who trained with the Wright Brothers. After his draft evasion, he was captured at his stately mansion as his gun-toting mother tried to fend off the police.

Bergdoll's escape overseas would prove to be a thorny issue in international politics. It resulted in a contentious investigation in Congress, where one witness was nearly shot by a representative. He was regularly pilloried by veterans' groups, and American servicemen twice tried to kidnap him. As Bergdoll's exile dragged on, he was left with a harsh choice: return to the country where he was a wanted man, or stay in Europe to face the perils of the Nazi dictatorship.

Dirk Langeveld is a marketing editor at The Day in New London, Connecticut. In this role, he has contributed to several pictorial books on local history, including Service Above Self: The 225-Year History of the U.S. Coast Guard, First and Finest: The 100-Year History of Naval Submarine Base New London, and When Disaster Strikes: Shipwrecks, Storms and Other Calamities in Southeastern Connecticut. He is also the author of The Downfall Dictionary, a blog on political scandal in U.S. history. Langeveld lives in New London with his wife, Alison, and daughter, Justine.