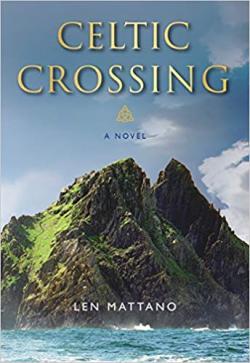 Bank Square Books presents a book release party featuring Len Mattano in celebration of his new novel Celtic Crossing. This event is free and open to the public and will be held at Enders Island in Stonington.

A thought-provoking inspirational suspense novel that engages the intellect, the heart, and the soul.

Raised on faith but with an inheritance of death, Aideen has been at odds with religion since losing her daughter to a brain tumor. Now it is her orphaned grandson who lies dying. In desperation Aideen turns to popular American author and New Testament era scholar Fr. Kevin Schaeffer for help. Armed with a priceless family bible and the sacred pendant worn by Aideen’s beloved great-grandmother—the last to be cured—Kevin abandons his sabbatical research in Dublin and sets his sights on finding the relic in time to save the child.

In their search for clues from Armagh, to Skellig Michael, to Rome, the historical trail from Golgotha to Gaul is slowly revealed as Kevin, his lifelong Vatican friend Marco, and a passionate would-be Irish seminarian uncover truths that ultimately reshape their lives.

Celtic Crossing is a deeply poignant yet transcendent tale of life redeemed through death.

Len Mattano is an accomplished, well-published pediatric oncologist, clinical researcher, and professor whose academic career spanned 20 years. He is currently a part-time consultant transitioning to full-time novelist. His writing credentials began in college as a byline writer for the student newspaper and have continued unabated in the professional realms of medicine and drug development. True to his liberal arts roots, courses outside the sciences included creative writing, literature, and the humanities. He possesses a strong compositional sense expressed in writing, photography, music, and gardening. Len and his family reside in Mystic, Connecticut.

A deeply poignant, transcendent tale of life redeemed through death.