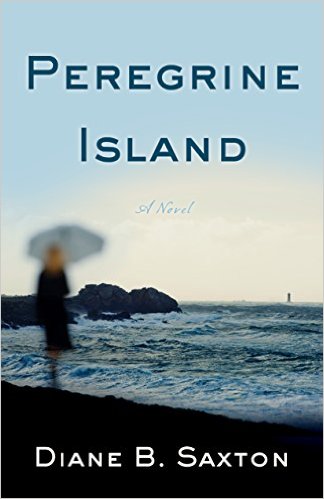 Diane B. Saxton’s debut novel PEREGRINE ISLAND (She Writes Press; August 2, 2016) explores the mysteries behind three generations of women, one valuable painting, the artist who created it, and those who would do anything to possess it—even kill.

The action takes place on a privately owned island on Long Island Sound, where prim Winter Peregrine lives with her fickle, reckless daughter, Elsie, and her sensitive young granddaughter, Peda. Winter is named for the season her father preferred because “there were no distractions then.” But now it’s summer with distractions aplenty, particularly when two art “experts” suddenly arrive on the island to examine a beloved family heirloom: an early 20th century waterfrontscene by world-famous artist Simon Crandor.

The painting is one of the few privately held Crandors, and the two experts – along with Crandor’s debonair grandson, Hamlet – want to determine the piece’s authenticity.  But when they pull the painting from its frame, they find more than they bargained for – hidden documents and additional paintings, possibly by Crandor. Who put them there and why? And who stands to gain and lose from the discovery of these stunning treasures?

In this engrossing literary novel that brings the Sound to vibrant life, not even a painting can be taken at face value, “For what you see, or think you see on Peregrine Island, is seldom what it seems.”

DIANE SAXTON was a journalist with Vanity Fair, Holiday Magazine, and Greenwich Review, and covered everything from torture victims to psychics, animal rights activists, exotic travel, and movie producers. A new chapter opened up for her after interviewing Amnesty International US founder Hannah Grunwald. Alarmed that the stories of incredible and influential lives such as Grunwald’s could be lost as the Greatest Generation passes, Saxton began capturing their histories and compiled them into a 1,000 page biographical collection, which became the inspiration for her next novel. She brings the same gift for storytelling with illuminating subtext to her debut novel, PEREGRINE ISLAND. Saxton divides her time between New York City and the Berkshires, where she lives with her husband, dogs and horses.