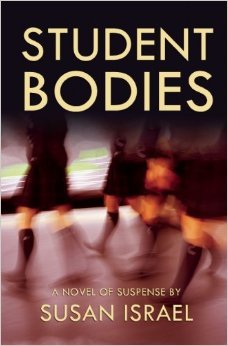 Join Bank Square Books for an author Q&A with Susan Israel, the author of Student Bodies, in conversation with local journalist and author John Valeri. This event is free and open to the public, and no RSVP is required.

About the Book
Delilah Price is way out of her comfort zone. To make ends meet, she's had to take a job as a substitute teacher at a middle school in Brooklyn, which means she has less time for her work as a sculptor. But that's nothing compared to everything else going on in her life.

On her way to the school the morning of her first day on the job, Delilah witnesses a teenage girl falling to her death from a subway platform. Several witnesses claim she was pushed. The girl turns out to be a student at Delilah's school.

Meanwhile, her relationship with Detective Patrick Quick has taken a step forward and a few steps back. Patrick has been consumed with tracking down a serial rapist. Now there appears to be a copycat rapist...and he's targeting women in Delilah's neighborhood and social circle.

Susan Israel's second riveting mystery continues the story of one of the most intriguing new heroines in the suspense genre.

About Susan Israel
Susan Israel lives in Connecticut and is a graduate of Yale College. Her fiction has been published in Other Voices, Hawaii Review and Vignette, and she has written for magazines, websites, and newspapers, including Glamour, Girls Life, Ladies Home Journal and The Washington Post. She is the author of the first Delilah Price novel, Over My Live Body, and she's currently at work on the third.

John Valeri was an independent contractor for Examiner.com from February of 2009 to July of 2016. His Hartford Books Examiner column consistently ranked in the top ten percent of all Hartford, National Books and National Arts & Entertainment Examiners. His reviews have been excerpted in more than fifty titles written by popular authors ranging from Wally Lamb and Debbie Macomber to James Patterson and Marcia Clark. He regularly moderates author interviews and book discussions at bookstores, conferences, and libraries throughout Connecticut; he has also appeared on television and radio. His debut fiction appears in Tricks and Treats, a Halloween-themed anthology due out from Books & Boos Press this fall.