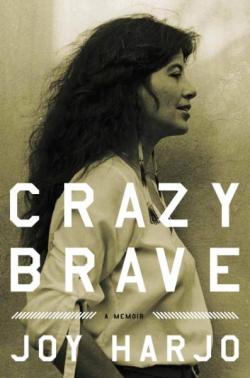 A “raw and honest” (Los Angeles Review of Books) memoir from the first Native American Poet Laureate of the United States.

In this transcendent memoir, grounded in tribal myth and ancestry, music and poetry, Joy Harjo details her journey to becoming a poet. Born in Oklahoma, the end place of the Trail of Tears, Harjo grew up learning to dodge an abusive stepfather by finding shelter in her imagination, a deep spiritual life, and connection with the natural world. Narrating the complexities of betrayal and love, Crazy Brave is a haunting, visionary memoir about family and the breaking apart necessary in finding a voice.

Joy Har­jo, the 23rd Poet Lau­re­ate of the Unit­ed States, is a mem­ber of the Mvskoke Nation and belongs to Oce Vpofv (Hick­o­ry Ground).

Born in Tul­sa, Okla­homa, she left home to attend high school at the inno­v­a­tive Insti­tute of Amer­i­can Indi­an Arts, which was then a Bureau of Indi­an Affairs school. Har­jo began writ­ing poet­ry as a mem­ber of the Uni­ver­si­ty of New Mexico’s Native stu­dent orga­ni­za­tion, the Kiva Club, in response to Native empow­er­ment move­ments.

Har­jo is the author of nine books of poet­ry, includ­ing her most recent, the high­ly acclaimed An Amer­i­can Sun­rise (2019); Con­flict Res­o­lu­tion for Holy Beings (2015), which was short­list­ed for the Grif­fin Prize and named a Notable Book of the Year by the Amer­i­can Library Asso­ci­a­tion; The Woman Who Fell From the Sky (1994), which received the Okla­homa Book Award; and In Mad Love and War (1990), which received an Amer­i­can Book Award and the Del­more Schwartz Memo­r­i­al Award. Her mem­oir, Crazy Brave, was award­ed the PEN USA Lit­er­ary Award in Cre­ative Non Fic­tion and the Amer­i­can Book Award.

A “raw and honest” (Los Angeles Review of Books) memoir from the first Native American Poet Laureate of the United States.