PROVIDENCE: Zeyn Joukhadar (The Map of Salt and Stars) Talk and Signing with Reading Across Rhode Island 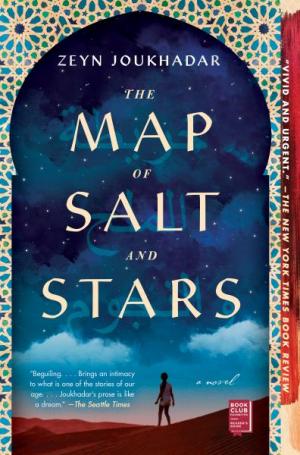 Savoy Bookshop & Café and Reading Across Rhode Island (RARI) present an evening with Zeyn Joukhadar, the author of The Map of Salt and Stars, a novel of two girls living 800 years apart—a modern-day Syrian refugee seeking safety and an adventurous mapmaker’s apprentice. This event is the first in our new RARI Recommends series, featuring some of our committee's favorite authors and books. Tickets are $20 and include a paperback copy of The Map of Salt and Stars.

It is the summer of 2011, and Nour has just lost her father to cancer. Her mother, a cartographer who creates unusual, hand-painted maps, decides to move Nour and her sisters from New York City back to Syria to be closer to their family. But the country Nour’s mother once knew is changing, and it isn’t long before protests and shelling threaten their quiet Homs neighborhood. When a shell destroys Nour’s house and almost takes her life, she and her family are forced to choose: stay and risk more violence or flee as refugees across seven countries of the Middle East and North Africa in search of safety. As their journey becomes more and more challenging, Nour’s idea of home becomes a dream she struggles to remember and a hope she cannot live without.

More than eight hundred years earlier, Rawiya, sixteen and a widow’s daughter, knows she must do something to help her impoverished mother. Restless and longing to see the world, she leaves home to seek her fortune. Disguising herself as a boy named Rami, she becomes an apprentice to al-Idrisi, who has been commissioned by King Roger II of Sicily to create a map of the world. In his employ, Rawiya embarks on an epic journey across the Middle East and the north of Africa where she encounters ferocious mythical beasts, epic battles, and real historical figures.

A deep immersion into the richly varied cultures of the Middle East and North Africa, The Map of Salt and Stars follows the journeys of Nour and Rawiya as they travel along identical paths across the region eight hundred years apart, braving the unknown beside their companions as they are pulled by the promise of reaching home at last.

Zeyn Joukhadar is the author of the novel The Map of Salt and Stars, a member of the Radius of Arab American Writers (RAWI), and a member of American Mensa. His work has appeared in Salon, The Paris Review Daily, The Kenyon Review, The Saturday Evening Post, PANK Magazine, and elsewhere, and has been nominated for the Pushcart Prize and the Best of the Net. The Map of Salt and Stars, currently being translated into sixteen languages, was a 2018 Middle East Book Award winner in Youth Literature, a 2018 Goodreads Choice Awards Finalist in Historical Fiction, and received starred reviews from Kirkus, Booklist, and others. Joukhadar has been an artist in residence at the Montalvo Arts Center in Saratoga, California; the Fes Medina Project in Fes, Morocco; and Beit al-Atlas in Beirut, Lebanon. He will be an artist in residence at the Arab American National Museum in Dearborn, Michigan in 2019.

Originally from New York City, Joukhadar earned a PhD in the Pathobiology Graduate Program at Brown University and worked as a biomedical research scientist before switching careers to pursue writing full time.

The Map of Salt and Stars: A Novel (Paperback)

This powerful and lyrical debut novel is to Syria what The Kite Runner was to Afghanistan; the story of two girls living eight hundred years apart—a modern-day Syrian refugee seeking safety and an adventurous mapmaker’s apprentice—“perfectly aligns with the cultural moment” (The Providence Journal) and “shows how interconnected two suppos