SAVOY: Amal El-Mohtar and Max Gladstone (This Is How You Lose the Time War) Talk and Book Signing 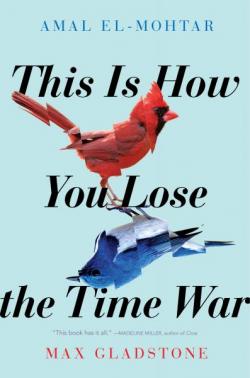 Savoy Bookshop & Café presents an author discussion and book signing with Amal El-Mohtar and Max Gladstone, the authors of the new book This is How You Lose the Time War. This event is free and open to the public.

Two time-traveling agents from warring futures, working their way through the past, begin to exchange letters—and fall in love in this thrilling and romantic book from award-winning authors Amal-El Mohtar and Max Gladstone.

Among the ashes of a dying world, an agent of the Commandant finds a letter. It reads: Burn before reading. Thus begins an unlikely correspondence between two rival agents hellbent on securing the best possible future for their warring factions. Now, what began as a taunt, a battlefield boast, grows into something more. Something epic. Something romantic. Something that could change the past and the future. Except the discovery of their bond would mean death for each of them. There’s still a war going on, after all. And someone has to win that war. That’s how war works. Right?

Cowritten by two beloved and award-winning sci-fi writers, This Is How You Lose the Time War is an epic love story spanning time and space.

Amal El-Mohtar is an award-winning author, editor, and critic. Her short story Seasons of Glass and Iron won the Hugo, Nebula, and Locus awards and was a finalist for the World Fantasy, Sturgeon, Aurora, and Eugie Foster awards. She is the author of The Honey Month, a collection of poetry and prose written to the taste of twenty-eight different kinds of honey, and contributes criticism to NPR Books and The New York Times. Her fiction has most recently appeared on Tor.com and Uncanny Magazine, and in anthologies such as The Djinn Falls in Love & Other Stories and The Starlit Wood: New Fairy Tales. She is presently pursuing a PhD at Carleton University and teaches creative writing at the University of Ottawa. She can be found online at @Tithenai.

Max Gladstone is the author of the Hugo-nominated Craft Sequence, which Patrick Rothfuss called “stupefyingly good.” The sixth book, Ruin of Angels, was released September 2017. Max’s interactive mobile game Choice of the Deathless was nominated for the XYZZY Award, and his critically acclaimed short fiction has appeared on Tor.com and in Uncanny Magazine, and in anthologies such as XO Orpheus: Fifty New Myths and The Starlit Wood: New Fairy Tales. John Crowley described Max as “a true star of 21st-century fantasy.” Max has sung in Carnegie Hall and was once thrown from a horse in Mongolia.

This Is How You Lose the Time War (Hardcover)

Two time-traveling agents from warring futures, working their way through the past, begin to exchange letters—and fall in love in this thrilling and romantic book from award-winning authors Amal El-Mohtar and Max Gladstone.