Savoy Bookshop & Cafe presents an open house book signing with Beth Caruso for the book One of Windsor. This event is free and open to the public. 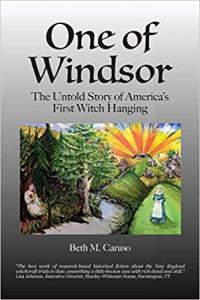 A Chilling Story From Windsor: Connecticut's Earliest Town and the Home of Alice 'Alse' Young, the Unfortunate First Victim of the Connecticut Witch Trials

​The Prequel to the Salem Witch Trials and One of the Most Appalling Cover-Ups in American History!

Alice, a young woman prone to intuitive insights and loyalty to the only family she has ever known, leaves England for the rigid colony of the Massachusetts Bay in 1635 in hopes of reuniting with them again. Finally settling in Windsor, Connecticut, she encounters the rich American wilderness and its inhabitants, her own healing abilities, and the blinding fears of Puritan leaders which collide and set the stage for America’s first witch hanging, her own, on May 26, 1647.

This event and Alice’s ties to her beloved family are catalysts that influence Connecticut’s Governor John Winthrop Jr. to halt witchcraft hangings in much later years.

Paradoxically, these same ties and the memory of the incidents that led to her accusation become a secret and destructive force behind Cotton Mather’s written commentary on the Salem witch trials of 1692, provoking further witchcraft hysteria in Massachusetts forty-five years after her death.

The author uses extensive historical research combined with literary inventions, to bring forth a shocking and passionate narrative theory explaining this tragic and important episode in American history.

This novel is based on the life of Alice 'Alse' Young and the possible events that led to the first witch hanging in the American colonies.

Author Beth M. Caruso grew up in Cincinnati, Ohio and spent her childhood writing puppet shows and witches’ cookbooks. She became interested in French Literature and Hispanic Studies, receiving a Bachelor of Arts from the University of Cincinnati. She later obtained Masters degrees in Nursing and Public Health.

Working as a Peace Corps volunteer in Thailand, she helped to improve the public health of local Karen hill tribes. She also had the privilege to care for hundreds of babies and their mothers as a labor and delivery nurse. Largely influenced by an apprenticeship with herbalist and wildcrafter, Will Endres, in North Carolina, she surrounds herself with plants through gardening and native species conservation.

Her latest passion is to discover and convey important stories of women in American history. One of Windsor is her debut novel. She lives in New England with her awesome husband, amazing children, loyal puppy, and cuddly cats.

One of Windsor: The Untold Story of America's First Witch Hanging (Paperback)

Alice, a young woman prone to intuitive insights and loyalty to the only family she has ever known, leaves England for the rigid colony of the Massachusetts Bay in 1635 in hopes of reuniting with them again.